Until Tao arrived on the scene, I had never really been a dog person. My sister had a dog when we were kids, my kids brought one home (it stayed) and one of my partners had a dog. If there was a common trait among them all it was stupidity. They were amiable enough (better than being ferocious, I guess) but pretty stupid. I also had the impression that dog-owners were “ga-ga” about their dogs and were unable to think rationally about the critters.

So when my wife Debbie decided that she wanted a dog I was far from enthusiastic. However, she figured it would help her to keep mobile with her recently diagnosed MS. We discussed the procurement spec. for the canine object. I was not going to have anything stupid and it had to be a real dog – not some foo-foo thing that might be mistaken for a dust bunny and sucked up by the vacuum cleaner. We have a rather remote cabin in the mountains and we also didn’t want anything that might be molested by a chipmunk or a squirrel.

Our neighbours have an Irish terrier. Seemed to be a smart dog with a mind of its own. Research confirmed it was a good fit with my spec so we signed up for one with a breeder on Vancouver Island. Delivery time could be up to 2 years (great, I thought – a bit of respite before the critter appears). 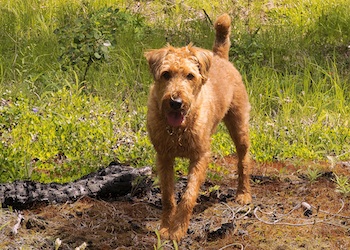 However, not long after placing the order, we had a call from the breeder. Their daughter, who bred Airedale terriers, had been visiting with her dog. It seems like some unplanned breeding took place. How would we like a 50% Irish 50% Airedale at 50% of the price? Researched Airedales and they also seemed to have a similar spec. to the Irish. Definitely able to handle chipmunks. OK, we’ll go for the mongrel.

So Tao arrived somewhat earlier than we expected. Why did we choose the name? Actually, Debbie chose it independently. It’s Chinese in origin and means “the way” or “the path”. It is, of course, the philosophy known as Taoism or Daoism and one which has intrigued me for many years. From the day we picked him up, he has had a philosophic bent. He likes to retreat to his own mountain top and think about things (as long as there are no distractions such as squirrels or cats).

He has turned out to be quite a charming and smart dog. Fast to house train, likes his crate, loves the car, never chewed up anything (however he has a sense of humour and likes to steal socks to tease you), only eats his own food and has never tried to steal ours. He will leave the cat’s food dish untouched because he knows it’s not his. If we move the dish somewhere else and tell him it’s OK to finish it off, he will then eat it. He is not a barker in the house unless he detects something that needs our attention. We can leave him for long periods alone in the house and he’s fine with that. Obedience classes went well. We thought what a great dog. What more could you ask for. 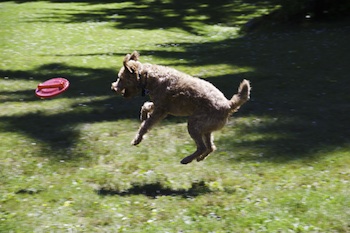 So, everything was fine for the first 18 months. Then we went away for ten days and the boarding situation which we thought was good turned out to be not so good. Tao came back a different dog. He showed some aggressive tendencies before, but now, primarily outside the home, Tao started to become, shall we say “over-protective” or “over defensive”.

This involved lunging at any person or animal that he considered a threat – including other dogs, children or adults. He also became quite defensive when children ran by our home and other animals came onto our property. He also would lunge after any squirrel or other critter that he saw.

We consulted a number of different dog trainers and tried their suggested techniques. We watched videos and read numerous books, again trying many different methods. We worked daily and were consistent with the training but nothing really worked well. We had a pretty obedient dog but the aggression issues continued.

Friends of ours had successfully used Sit Happens with their dog (who had developed an appetite for chewing up those who delivered the mail). After our failures with the other trainers, we were reluctant to pay for more unsuccessful advice. However, we worried that he was going to pull me down or hurt something if we let it continue. In search of more advice on the internet Deb came across a video of a woman with MS who had similar issues with her dog Rozy. What a surprise to see it was Sit Happens! It was the same trainer that had helped our friends. 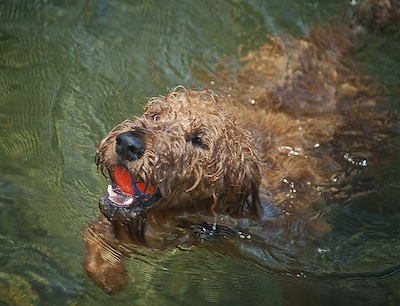 I called Jeff and asked a few questions and he convinced me to let one of their trainers visit for a free consultation. A visit from Marilyn convinced us that Sit Happens was indeed an effective training method to achieve behaviour modification Tao required.

Within a short period of time, Tao was a markedly different dog and increasingly relaxed when he was out and about and was greeting and playing with children.

Now, after about 6 months, he can almost always figure out what’s a threat and what isn’t. I won’t say he’s perfect but is getting pretty close. Some dogs he just doesn’t like and he still has to be persuaded that they are not candidates for a good chewing up. During training classes he really seems to like achieving results and pleasing us.

It is nice to know Sit Happens trainers are only a call away if we need further advice and that we can attend classes for as long as we need. Tao’s obedience which we thought was pretty good actually escalated to where we are quite comfortable to have him off leash with other dogs, children and adults. 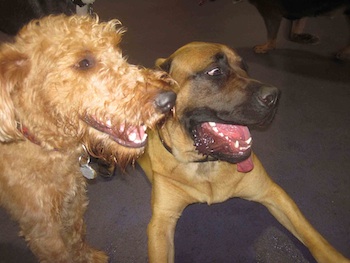 His recall is amazing even when he sees a squirrel and he doesn’t flinch when he sees the neighbour’s cat on our patio.

He is just as spirited as he ever was but much calmer and happier in dealing with the outside world. We were also amazed to see in class that dogs from pups to seniors responded extremely well with Sit Happens training.

We wish we had contacted Sit Happens a lot sooner than we did.

Tao’s good humour and zest for life has been “the way” for Debbie to keep her spirits high. Never a day goes by without Tao bringing a smile to our faces. For me, Tao has been ‘the way” for me to establish a whole new relationship with dogs – you can actually grow to love them. In walking Tao I’ve met a lot of dog owners and discovered that they are pretty nice people (only a few are really ga-ga but that are life in general). 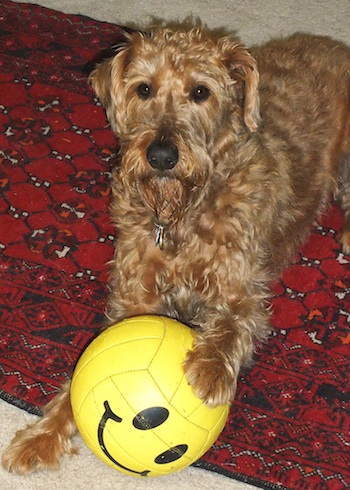 Thanks to Sit Happens, we have also found a way to ensure that Tao can be with us in enjoying the big world outside our home – the life that he really deserves.