In the summer of 2005 our dear Bichon Frise, Keaton, passed away.We loved the Bichon breed because they were not a very high energy dog, and they are friendly and loyal.  We decided 3 months after his passing to get another Bichon.
We first checked out different web sites and the newspaper. One day we noticed an ad for a 3 month old Bichon in Kelowna
We took the drive to Kelowna. When we arrived at the kennel a lady greeted us, and we sat down and talked about him. She said go see him over there in the little dog house, as we approached he came out and behind him was a little white Samoyed. We could see that he ruled the roost.
On the way back home, Willis sat between us on the front seat and he was so scared and shaky. When we arrived home, we had everything ready to make him comfortable, even a brand new Kennel. He was so cute. John and I just loved him immediately.

Training him to do his stuff outside was not too difficult. It only took a little over 3 weeks which was good considering we lived on the 3rd floor of a condo.
He was a good dog for quite sometime. But after a while his behaviour started to change around strangers. When people approached him, he would jump up and try to bite them. We realized that he was ruling our roost! This was not good. We were  especially concerned about children. It was a challenge to get him to calm down when the door bell rang too.
This was new territory for us because we never had issues with Keaton. We knew we needed help so we began looking for training for Willis. We found someone to help us, but it wasn’t working very well. The training techniques were treat/reward based, and Willis would not respond consistently. 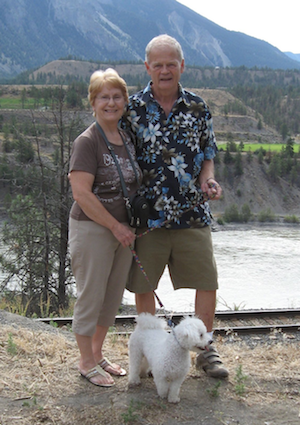 Continuing our search, we found the Sit Happens website. One of the team leaders came to our home with her own dog to show us the training in action. It seemed like a different approach to training. We couldn’t believe how obedient her dog was, and we wanted that for Willis. so we decided to sign up immediately.

Willis enjoys going to the training sessions at the parks, and we get to decide which ones to attend (different locations)  and we go as many times as we want.I was nervous and concerned about distractions during training, with the other dogs and owners around.  But Jeff and Marilyn said that it was a good thing. Sure enough, it wasn’t long before Willis was responding to our commands and I noticed he was focused on me most of the time.

Before John and I discovered Sit Happens, the thought of him responding to our commands off leash was hard to believe. After a few weeks, Jeff came over and said to take his leash off. We were amazed that he did the commands off leash, we were so pleased.

Willis is a totally different dog today. He even plays with our two year old Grandson.

We no longer put him in the other room when people come around.  Instead, he goes on his ‘place’ and stays there.

We can take him out in public places and he is friendly and calm around strangers.

Thank you Jeff and Marilyn for all your dedication and assistance with Willis.