After the loss of one of our dogs (Lucky our Rottweiler) last year, my family and I felt we were ready for another dog. Even though Bella our pug and Lucky got along well we decided on a medium sized breed of dog this time .

We thought it would be special to adopt a dog from a shelter or rescue, a dog that really is in need of a home.

While watching the news one evening I saw a story about a mother pit bull and her puppies that had been seized by the S.P.C.A. This is a breed of dog I was already considering. I know people who have owned them and have always really liked these dogs. So I made a phone call to the centre. They told me they had many puppies, eighteen to be exact.

Two weeks later my daughter and I took a day trip to pick up our new puppy. Vito was beautiful and when he was handed to me he put his head under my chin and snuggled himself right into me and I fell in love with him right then. The litter of puppies had been spayed and neutered that day and watching them run around and playing you couldn’t tell. One thing I could tell right away though was my little puppy was definitely the bruiser of the bunch. He was bigger than the others and almost seemed to be flailing his hips while he was strutting around the other puppies.

We got home and Vito took to the other dogs immediately, my parents dogs were staying with us for the holidays and all four got along just great. I was struck by the way Vito adjusted immediately to them and his new surroundings. He showed no fear or anxiety. He greeted us all like a dog that has been reunited with his family after being away from them.  He acted like he had always been with us.

Our puppy was a sweetheart, that was until I tried to exercise some control. My sweetie turned into a snarling, lunging and biting little devil. He definitely thought he was in charge of the household; he owned everything and everybody and watch out if you tried to claim them back. I had never dealt with a puppy this domineering before and knew right away I needed help.

I knew I had to get this behavior under control and really fast. Vito wasn’t going to be five pounds forever.

I decided to talk to my veterinarian. I told him what was happening. He agreed that I needed to control these behaviors before they got worse. He suggested Sit Happens Dog Training, and gave me a brochure to take home. He said he knew people who’d used this training program and was positive they could help me with Vito.

I called and set up an appointment.

After the first day of training Vito was a different dog. It was like a switch had been turned on and he knew I was in charge and he did not seem to mind at all. He was obeying my commands. I could not believe it. Not only was he doing what I asked him to, but he seemed so happy. Instead of being snarled at and getting bitten I was getting kisses. My only regret that day was not starting this training program sooner. 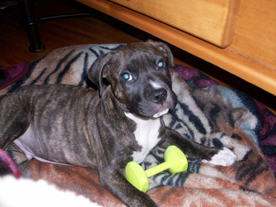 After only a couple of the park sessions Vito walks right at my side, around a park full of other dogs, without being distracted AND without a leash on. I can put Vito in place and he will not move until I tell him to move.

My family does a lot of out-door activities and it is a relief to know that we can take our dogs anywhere and have them be well behaved and more importantly safe.