When we decided to get a dog the only thing we knew for certain was that we wanted a dog that did not shed. We considered other breeds but ultimately decided on a soft-coated wheaten terrier because they are generally friendly dogs. We had done some reading on what to expect when you get a new dog, specifically a puppy, and even received a “puppy packet” from our breeder explaining about our breed, how our puppy had been raised thus far and his schedule (eat, outside, play, outside, sleep, outside, repeat). So when we picked up our new puppy, Truman, from the airport we thought we were prepared.  Wrong.

Truman was so small and cute, but had such a big stubborn personality. Our little puppy was controlling our lives! We had read about crate training and were giving it our best attempts, but Truman hated his crate with a passion.  He would never go in his crate on his own accord and moment we got him in and the door closed he would bark and cry until someone let him out. His separation anxiety was so bad that we felt guilty every time we needed to leave the house and he could not come with us. Truman also had a constant need to chew something and that something was never one of his toys, but rather our shoes, tables, baseboards, hands, mail, etc.  We had given him the nickname the “Trumanator” for his destructive ways.

Everyone we talked to had his or her advice on what we should do, but unfortunately it was never the same and often conflicting, which only added to our confusion. We had always planned on taking Truman to obedience class, but were under the misconception that you couldn’t take your dog to class until they were twelve weeks old. One day when we were looking at our vet’s website we also looked at their links page and under dog training the only obedience training they had listed was Sit Happens. We decided to call right away to get some information and perhaps enroll him for a class as he was approaching twelve weeks and were shocked to find out we could start Truman’s training right away.

While we were drawn by the clever name what really made up sign up was Jeff’s demo with his dogs. On a dark rainy night Jeff’s dogs did everything he asked them to do even his Jack Russell Diego, who at the time, he had only been working with for a few months.  When he said our dog could be like Diego as well it seemed too good to be true.

When our first home session came around we were eager to get started feeling that we needed to make up for lost time and a little nervous about how our little puppy monster would take to training but Jeff put us at ease after only the first 20 minutes when Truman started coming on command and would hesitate to jump up on people. After the next two home sessions we learnt how to heel, sit and, our favourite, the place command. When it was time for park training we thought that there was no way Truman would hold his place in a park full of dogs without charging after them as he is very social dog. Amazingly Truman showed us that he could hold his place and come when called and heel even with the all the distractions of a park setting. 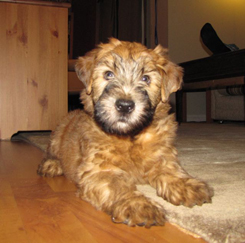 After attending the group sessions for a couple months Truman has really taken to all the training. It no longer feels like a chore to take him for his daily walk as he can heel and will not charge towards other dogs or people.  We can even let him off leash without having to worry that he won’t come when we call him.  And probably most importantly we got rid of the Trumanator and gained our lives back.  We now enjoy the time we spend with our dog.

Without the training and help that we have received from the Sit Happens, we would probably still be trapped in our house with a dog and demolished furniture.