In December of 2011 we were the lucky recipients of a little muscular bundle of energy known as Scotch.Our little Jack Russell is a loaded spring of excitement a purveyor of play and most importantly, a layer on of copious amounts of love. His motto is: “Any lap will do”. The journey for Scotch is an interesting soiree that many animals travel down. But first some background.
In November we lost our first Jack, Pippin. He was a true blue protector of our house. Unfortunately he was not the cuddliest dog but he certainly loved everyone: we were just never sure if it was for the pats he received or the bites he would administer. After his passing we discussed perhaps taking a break with just our remaining JR, Talula (another older adoptee). But then fate, as seems to be the core of all tales, stepped in. While surfing the net we came across a great site, JR Rescue based out of Oregon. Listed on the site are Jacks up for adoption or tales of ones that have started life over with another family. One thread attached each one of these stories; each Jack came from disparate situations.When investigating why so many Jacks were up for adoption we found a new term in the pet world – foreclosure dogs. It seems that when families fall upon hard times one of the first causalities is the family pet. We called the JR Rescue group and were greeted with a warm hello and then questioned whether we really knew what being owned by a JR really meant.

The JR Rescue motto is: “When you adopt one you save two. The one that is part of your family and the one you create a space in our rescue family”. So that was the final word, we called and arranged for a visit with our new little man.We also knew that with his background the best training needed to be part of the answer, that’s why we called Jeff and Sit Happens.
Scotch started his life on the streets of California. He was picked up as a stray and placed with a family in Oregon. His life was mostly spent in the garage or the small backyard. One of his residual behaviors from his upbringing is his almost obsessive hunt for flies – we are working on teaching him to hunt mosquitos.

At the age of five he was placed into the local pound and marked for euthanizing. This came from his past history of biting the local mailman. With being placed in a pound that history is brought up and as decreed by state law he must be put down. Thankfully JR Rescue stepped in and we adopted Scotch one week later.

With Sit Happens his life, and ours has dramatically changed. He walks off leash on the Shuswap summer retreat, does not bite the vacuum or chase the meandering deer that populate the property. 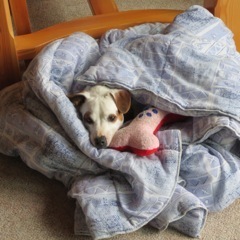 He is calm, happy and more than willing to play all day. We feel lucky to have him in our lives and realize that a well-trained puppy makes a truly happy and safe dog.