In July of 2007, my daughter surprised me with an 8 week old Miniature Pincher puppy I named Sadie.

After a week of receiving her she was crate trained and at 3 ½ months, she was housebroken. I thought wow what a great dog easy to train. Sadie’s a real cuddler and affectionate dog. She’s also a high energy dog that likes to run and chase whatever moves.

Starting a round 4 months the bad behavior started. Sadie would run under my bed where I couldn’t reach her and would destroy anything she could fit in her mouth. She loved the kids rooms for there was so much to choose from. She even tore the lining off the bottom of my box spring mattress.

When I would fold laundry she’d quickly jump onto the clothes and urinate on them. She urinated on my bed and a couple of times on the couch. I was not impressed. I thought she may have had a medical problem but the vet said she was fine. She’d jump on your head and face unexpectedly when lying down, and would bite and snap at our faces for no reason.

I had her to the vets again to she if she had a sudden rage syndrome that some small dogs get but was told she was fine and didn’t show the signs of it. Sadie would also jump on visitors we had over and would be in 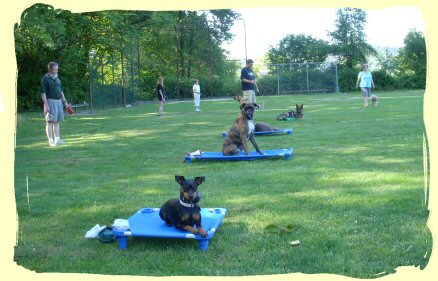 their faces. It was a fight to keep her off. She’d steel food from our hands and run. I stopped taking her for walks for she would pull on her leash while walking and show her dominance to the passing dogs and people by walking on her hind legs along with the barking and growling.

I had to put up baby gates so she wouldn’t go upstairs and run out of the front door and down the street. Trying to find her and get her back was a challenge. At times, I’d get so mad with her I didn’t want to be bothered to look for her since it happened so often. I was at the point of not knowing what to do with her anymore. I couldn’t control her or teach her anything because of her stubbornness.

I was so frustrated with her I was about to give up and wasn’t sure if I still wanted her or not. She even had me in tears a few times. One day at work, I saw a write up of one of the employees that brought her dog to work and the training she had put him through. SIT HAPPENS. Seeing them around the building over time it was inspiring. I was always telling myself that I wanted a dog to listen to me just like that. I made the call. Sadie was 9 months old at this time.

Sit Happens came and showed my family and I what they where able to do with their dogs and then with mine. When I saw what they were able to do with Sadie, I was speechless. My dog, with a little bit of work, was doing what she was supposed to do and right there I new there was hope for us all. I signed up after the consultation and after the first session the baby gates came down and all the previous problems were no longer a problem. 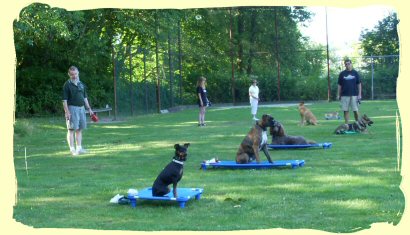 I’m now in control and so happy with my dog again. She walks with a proud prance and is acknowledged with a personal hello at every class by the instructor which I’ve never seen before at any other training classes. Sit happens is the best choice I’ve made for my dog and myself. Sit Happens saved our relationship with our dog. We still have lots to learn and even with our not so good days in training we work through it in a gentle and positive way.

This is the only training that has worked for me. When I meet strangers on our walks where ever we may be and they ask about my dog I tell them about SIT HAPPENS. 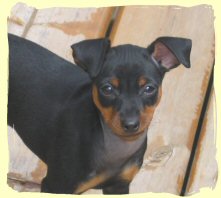 Thank you so very much Sit Happens!
The Khabra family