We had wanted a dog for years but had always lived in small basement suits and apartments that did not allow pets.When we finally moved into our town house we began our search for a dog that would compliment our lifestyle. We had wanted something that would make us laugh, and thought a large breed dog would be overwhelming in our place.

After looking at a few small breeds we decided against Daschunds as we like to hike and the Daschund was not a very all terrain dog. This brought us to the smooshed in faces of the bully breeds. When looking into all the wonderful bully breeds we couldn’t get enough of the silly looks and bug eyes of the Boston Terriers.

Once we had narrowed down our search and found a breeder, we started to plan on meeting the breeders but they were located in Barriere. This held up our plans as we were not going to get a dog from someone we never met. After a few weeks of messaging back and forth, we did meet the breeders when they were in town locally having a recent litter’s second shots administered. We went to meet them with the intention of getting to see the dogs and meet the people face to face. Of course things change when you have a puppy in your arms and Rosco became part of our family that Sunday in February of 2011.

Rosco started out very playful and could barely keep up on walks, but as he grew and got bigger we started having problems with him pulling and leading us. We also found his playful attitude and eagerness to meet everyone, both human and dog, starting to become a nuisance. When Rosco levelled out at 45 LBS his eagerness to meet dogs and his size began to intimidate some people and we started to get those kind of unwanted looks people get when their dog is out of control. Yes, I did say 45Lbs. Rosco had become a Jumbo Boston Terrier, we even started calling him the Boston Terror as a joke. We thought we could handle training our selves but found with our busy schedules the time spent trying to train at home got both us and Rosco frustrated.
By the time we came across Sit Happens, Rosco was about 9 months old. We had our first meeting with Marilyn in a Burnaby park, and after meeting her dog, Flirt, we  decided we wanted to try Sit Happens. After about five months and doing well in class, we found we had Rosco walking beside us on trails, and rarely startling people. We also realised we had started kind of late. Most other dogs were either younger than Rosco or way ahead of him. It really sank in for us when we met a few younger dogs that had started in the play sessions. In hindsite we see that this would have helped with him in the off leash parks as he tends to get a bit aggressive unless he has a ball to distract him.
His progress was halted and set back when Rosco suffered an injury to his shoulder while playing in an off leash park. He couldn’t walk well without pain and limping, and due to the soft tissue damage it was hard to diagnose. This kept Rosco very sedentary, making training very hard, as he could not come to class. 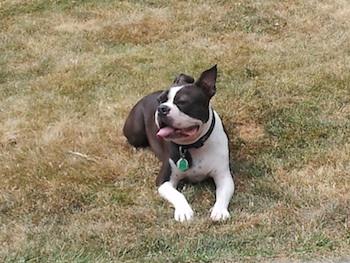 After X rays, ultrasounds and Neurologists, we were starting to think he was never going to get better and Rosco was starting to hate the vet. Our Vet recommending a Physiotherapy program, and after three months of treatments, we were back in class with only minor flare-ups with his shoulder. But being away from class and little training for 6 months we were thinking we would be right back to the beginning.
Now after being back at training again and healthy for six months, Rosco is doing very well. We have been walking him off leash on trails and if a situation arises where we need to call him back, he comes quickly and right to us. 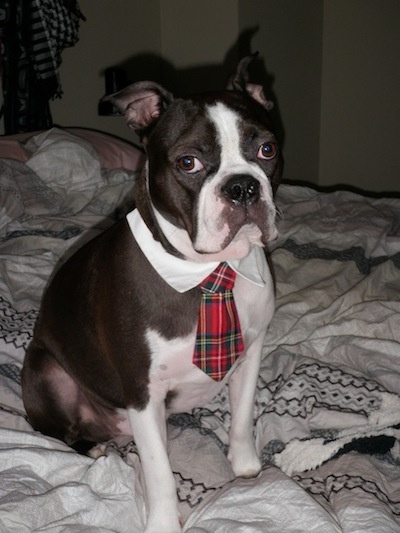 With advice from Marilyn and Jeff, we have also gotten his barking at animals (both real and on TV) under control, and know that with the lifetime training we will have help with any other surprises that this not so little lap dog throws at us.

We have recently adopted a Boxer from Without Borders Boxer Rescue and also started her with Sit Happens. We feel that Rosco’s training and response to commands has made it possible to welcome the new dog to our home.