On Saturday November 6, 2004, I opened the newspaper and saw Border Collie Lab Cross  puppies for sale. I called and made arrangements with the owner to meet the following day in order to look at the puppies. When my fiancé came home from work later that evening I had a dog bed, food and water bowls, puppy food, a collar and leash and most importantly a book on raising a puppy. Greg was still a little shocked when we made the trip to Abbotsford the next day to see these 7 week-old puppies. I told him not to worry because I have grown up with dogs all my life, so I knew exactly what was in store for us. When we arrived in Abbotsford, there were three puffy and black puppies crawling everywhere. Greg and I each held one. The one Greg had bit him on the chin, while mine licked my face. We picked the one that didn’t bite, who we named Oreo.

Little did we know what we were getting ourselves into.

We brought home this little fluffy puppy that was afraid of the shadows on the living room floor, and of her own reflection in her water dish. She hated to wear her collar, and refused to walk properly down the street when the leash was on. After weeks of running the puppy down the stairs and outside to the street in our pajamas, we finally saw some progress. She was sleeping through the night and could obey some basic commands such as “sit”, “stay”, and “shake a paw.” We thought things were turning around, but her puppy biting was getting worse. Her teeth were getting increasingly sharp and she was getting much stronger.

Nothing we did would make her stop, and we tried everything. It was so bad neither of us wanted to be home with her and we didn’t even take her out in public. Her behavior had gotten so bad that she would literally be hanging off our arms on walks! We thought this was merely her teething stage and that it would finally stop when she lost all her baby teeth. Unfortunately, this wasn’t remotely the truth. She was getting aggressive and would frequently corner me at the top of the stairs. 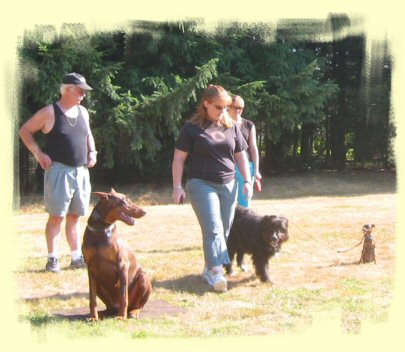 We could not walk up or down the stairs without losing part of our pant legs to her teeth, or our skin and the sleeves of our shirts.

Whenever we had people over, conveniently Oreo was a perfect angel and would not bite people she did not know well. No one understood our battles until my mother came to stay for a week in January. Halfway through the week, my mom said she was afraid of Oreo and did not want to be left alone with her. She told us we had to get rid of her before someone got hurt. We were so upset by this revelation to the point of getting rid of her. Our temporary solution was to take her to the park in order to fully tire her out. We realized that if she was sleeping she couldn’t bite anyone, so we had her running every minute that she was awake. This was indeed exhausting for us, and we decided that something had to change.

In February 2005, we were in Bosley’s Pet Store and asked about puppy obedience programs that were more intense than the ones found at the Rec. centre. Bosley’s suggested a program called “Sit Happens.” We called Jeff, and he came over for a free consultation with us. 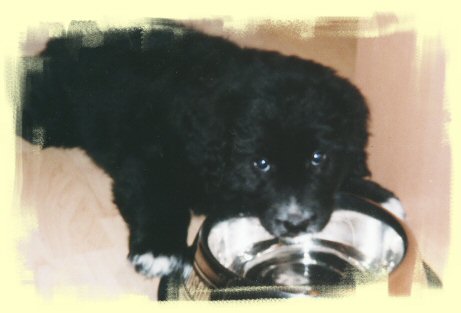 He asked us that if he could sprinkle magic dust on Oreo, what behaviours would we want changed. We said that Oreo’s biting had to go, even if that was the only thing we got from the training. That would have been more than enough.

Jeff told us that Oreo’s biting would disappear after a week, and Greg offered to pay him twice as much. It turned out that Jeff wasn’t lying. His methods of training really challenged us and Oreo. She is a very smart dog and needed to be challenged mentally as well as physically. Most importantly, we needed training ourselves in order to help Oreo respond to our commands. Jeff allows everyone to work at their own pace and to their own ability. Not once did we feel intimidated or embarrassed by our mistakes in the class. The other dog owners were very encouraging and supportive and we have made some good friends from this program. 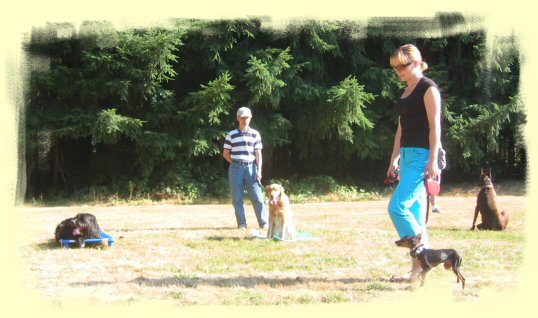 We started the program March 26, 2005, and never imagined that we could walk Oreo down the street without her leash off, heeling nicely beside us. We constantly get compliments on how well-behaved she is and how well she listens to us. Better yet, we take her everywhere with us, camping, hiking and visiting. We even think we can handle another puppy!! This time we will get a dog bed, food and water bowls, puppy food, a collar and leash and most importantly and call Jeff to sign up another dog!! 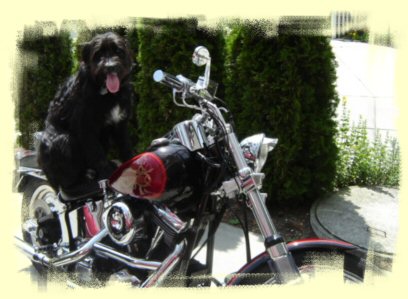 Oreo is the love of our lives and that is only true because of Sit Happens. We can’t thank you enough!! Greg, Leah and Oreo.