In April 2004 we adopted a beautiful lab cross, named Nero. He was 2 years old at the time and minus whining in the car (continuously), he was a well-behaved dog. He appeared to have had some training with his previous owners as he responded to basic commands, at least in the house. Though Nero knew all the commands, he was in charge of when he listened to us or not. If he was off leash playing and did not want to come, he wouldn’t no matter how many times we called him. Not even treats would get him back.

Nero played well with other dogs until a German Sheppard pup entered our backyard unannounced one day. Nero attacked him. The puppy was okay, but we were all pretty shaken up by the incident.
After that, Nero would sporadically become aggressive with dogs when we had him out for walks both on and off leash.

We signed up for dog training classes thinking we really needed some help. The classes were in a covered area, all the dogs learning to heal in a circle. Nero was great in class, but that’s where it ended. The teacher encouraged us to get a choke chain for Nero to control him on walks. We were not happy and Nero was not 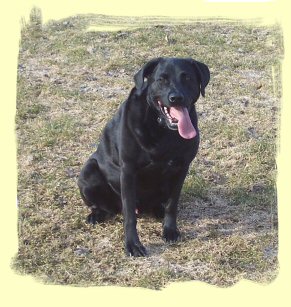 happy. We all became resistant to walking him because he would constantly pull on the leash and off leash play was anxiety ridden as we played with him and watched for other dogs at the same time that he might run after. My mom had to be in charge of walking him because she was worried my sister and I could not handle him.

We heard about Sit Happens in 2006 from someone that had gone through the program with both of his dogs. He raved about the program and told us about how well behaved his dogs were regardless of the environment they were in. We did not sign up at that time.

We were convinced that if we just educated ourselves on how to deal with him, it would be okay. We watched training shows on television and tried the techniques they used. It didn’t work.
Nero was well behaved at home making it easy to ignore his behavior outside. We had friends with dogs and Nero played well with them.

Then one day my sister Melanie was rollerblading and had Nero on leash. He saw a neighborhood dog and pulled Melanie to get to the dog. He attacked the dog. It was terrible. Again, the dog was okay, but that was the last straw for us. We knew we had to do something.

One night my mom was walking Nero and ran into a lady with her dog Guinness. Nero had played with her dog at the park before. The woman told my mom about the training program she had been through with her dog since we last saw them. It was Sit Happens. She said she was thrilled with the outcome as her dog was well behaved and would come when she called him. My mom phoned Jeff the next day and set up an appointment.

Sit Happens came to our house and explained the program. We could not believe how Nero immediately responded to Jeff and the tools he used in working with him. We were all very excited. Because Nero 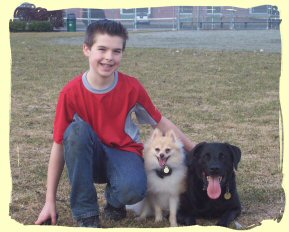 knew all the basic commands he caught on very easily- so did we.

My sister and Mom went to the first park training session and worked with Sit Happens.

Since then, my mom and I have been going to training sessions regularly. I work with Nero a lot on my own during class and at home.