In memory of our friend, Sheila, who passed away Feb 1,2015 after a brief illness. She will be fondly remembered for her devotion & dedication to Miss Muggins.

My name is Sheila, I have a 7-year-old miniature schnauzer named Miss Muggins.

We got her when she was 3 ½ months old from a breeder who didn’t want her because of her under bite. She was a sweet, very alert little puppy. We lived in Ontario ski country in a home with a fenced backyard with a ravine behind us. It was a community with very few neighbours in the summer, very few cars or trucks and no sidewalks. In winter we travelled to Florida to live in a community much the same.  She played in the backyard with friends or family’s dogs with no problems. She loved to be outside. Off the property she walked on a leash. If she saw a strange dog she would bark but not continuously. Miss Muggins barked when people came to the door or squealed if she saw her favourite people (especially children). She loved the car, was a good long distance traveler and an excellent motel guest who slept quietly in her crate at night or if we went out for dinner. When my husband became disabled she became his shadow, she walked carefully beside or behind him wherever he went and climbed up his legs to sit on his knee.

After my husband passed away Miss Muggins sat by his bed several times a day for a few months. I decided to move to B.C. to be close to my son and family. So at the age of 3 ½ years our lives were going to change (little did I realize how much!). She walked through the crowded airport, got in her crate and was put in a special cargo section for animals. After a seven-hour flight she came off the airplane in her crate. She showed no signs of stress and had yet to do any barking.
The next months were spent living at my son’s home in a quiet neighbourhood. She was very good in the house. I walked her many times each day. The first few walks were uneventful but as we began to walk farther we saw more people and dogs. Miss Muggins began barking at everyone – dogs, people, and children. As days went by the barking and squealing escalated. I tried treats to distract her.  We went to basic training classes where she barked at all the dogs. She passed her basic training and they suggested a spray bottle. That did not work after the first few times. I tried a spray collar and sonic device.  Nothing worked! Our walks were not much fun!

After 10 months we moved into our new ground floor condo. Our first walk was no different – barking and squealing at everything and everyone. Miss Muggins had never walked on a sidewalk, seen so many people, cars, trucks, or heard so many loud strange noises. She is a very alert dog and she (and I) were overwhelmed. I started walking at 5 am so we would meet no one.
I tried different routes and was always on the alert for dogs and a way to avoid them. I knew she needed many walks to get rid of her excess energy and to become accustom to her surroundings. All that seemed to change was my level of stress and her barking. It had accelerated to standing on her hind legs barking and growling which was starting to sound aggressive to me. We were becoming well known in the neighbourhood. One day I decided to try going to the park. When we entered she could see other dogs at the far end. She started her barking. I did not avoid people or children on the sidewalk, so we would stop to let them pass and eventually we could pass quietly. But if she saw a dog her antics would begin even if the dog were on the other side of the street.
In the condo she barked at the doors or when she could see dogs passing. She started sniffing at the hall door to smell if any dog was in the hall. I was worried that we would be asked to leave.
One day I was driving by Glen Park and saw the truck “Sit Happens”. As I looked into the park the dogs looked like they were sitting on camp beds (which later I came to know as places). I thought it was a catchy name.  I looked up the number, what did I have to lose? When I called Jeff (I’m sure he could tell by my voice how desperate I was) arrangements were made for him to come to my condo. When he arrived, he was greeted by Miss Muggins barking. We talked for a few minutes about our problems and he met Miss Muggins who had stopped barking and went to him. He asked me to bring her outside on her leash. He got his Jack Russell terrier out of the van. I thought, “Here we go”.  Much to my surprise Miss Muggins did not open her mouth. Jeff demonstrated with Diego on the sidewalk with NO leash what could be accomplished. He called Miss Muggins to come – and she did! Still no barking. I was impressed. We made arrangements for several other visits. At each visit he and I worked with Miss Muggins to come, sit, adding new commands as she progressed.  On rainy days we worked in the condo garage.  Jeff never rushed and always had praise for Miss Muggins and my progress.  He showed me new ways to work with her and always made me feel more confident. One day when he came we walked to the park. Miss Muggins did her usual when she saw other dogs. Jeff showed me how to handle this situation.  After several months of Miss Muggins and me practicing our new skills we joined the training classes.
At the beginning Miss Muggins stood on her hind legs barking and growling at nearly every dog. I practiced what Jeff had taught me and Miss Muggins began to show improvement. Jeff and Marilyn were always ready to provide help and give me confidence as I worked with Miss Muggins at the training classes.

Thus began a new phase.
We stopped walking at 5 am! I made sure we attended as many training classes as we could each month. We were welcomed each time by Jeff and Marilyn. They always watched carefully as you work with your dog, offering tips, praise, and demonstrating.
One day when Muggins was 6 Jeff said she was ready to be off leash in the park. He chose someone at class to be with us with their dog. He told me to take off her leash and let her go with Kip. I was so nervous but with Jeff there and the confidence I have in him to know when Miss Muggins was ready for a new experience I took the leash off. There was no barking or squealing. Miss Muggins was free after almost 2 years of always being on a leash outside. She followed the commands she knew, came when called and sat from afar. I’m not sure who was happier, me, who could have cried with joy or Miss Muggins who was running free and exploring with joy. We continued to walk three times a day, practicing and refining our skills and having free time in the park. She watches the other dogs and rarely barks.  With the commands she knows she can be easily distracted. She is beginning to look at the dogs and then ignore them on her own. Miss Muggins loves her free time at the park. She is learning to approach dogs that I know in a calm, slow manner off leash, by my side. 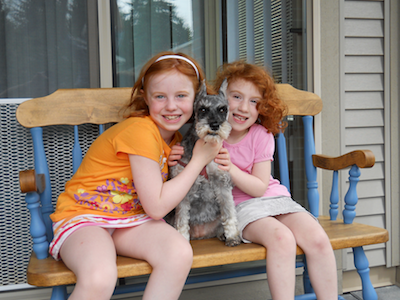 If you had met Miss Muggins when we first came to B.C. and saw her now you would not believe she is the same dog. People we have known from the beginning make a point of praising her progress.
On March 11, 2012 we joined the off leash training group. The day I looked forward to had arrived!!! Miss Muggins did very well. There was no standing on her hind legs growling and barking or approaching the other dogs off leash. She had reached the next step. We continue to attend the park training sessions, which are invaluable.
Thank you Jeff and Marilyn for your expertise and believing in Miss Muggins and me – giving us a joyful rather than woeful life in B.C. where “Sit” really does “Happen”!
Sheila & Miss Muggins
X
X