In August of 2000 my husband and I welcomed our first dog in to our family. Morgan was a 10 month old boxer who came to us from a rescue group in Michigan. I knew little about her except that she had fallen out of the back of a moving pick up truck and severely broken her pelvis and she was as cute as a button!!! I was so excited, for as long as I could remember I had wanted a dog. We were finally in a position to have one and I couldn’t wait to bring her home. I had so many plans, we would go for long walks on the beach, play at the dog park, go for hikes, go camping, and the possibilities were endless! Within days of arriving Morgan started to show signs of dog aggression. Her dog aggression only continued to get worse from there. At first it was a bark, a low growl, then a lunge and within days an uncontrollable dog at the end of a leash. For close to a year we went from trainer to trainer, 6 different trainers with 6 different techniques. Everyone told us they could “fix” her, make her better, and correct her behavior. We had some trainers tell us it would be a quick fix, others that told us to be happy with what we had and then others who said they wouldn’t work with us. At the end of the year we had a dog that had amazing obedience in the classroom as long as no dogs came in to her personal space and then the minute we stepped outside (and I mean the minute) she would lunge at the first dog she saw.

We found ourselves walking Morgan late at night in hopes of not running in to other dogs. We would sneak down to the tennis courts and lacrosse box near our home so we could let her off leash and go for a run and not run in to anyone. We would go for hikes, walks on the beach and trips to the park by ourselves. We couldn’t take Morgan with us, she had to stay home in her crate. We were embarrassed to have her out, we felt like we had failed her, like we had failed ourselves. My dream of owning a dog had become my nightmare. Morgan now controlled our lives. Our first year with her was full of tears, frustration and even some hatred (not at her but at the situation and her issues). We loved our little girl to death but at the same time we were so frustrated and angry with her issues and the trainers who had told us it would be a “quick fix” and yet here we were a year later exactly where we had started.

In June of 2001 I was fortunate enough to meet Jeff of Sit Happens. He had applied to volunteer for boxer rescue and I was the volunteer who went out to meet him. I was very intrigued by how well behaved his boxers were and a little astounded when my boxer snarled, growled and lashed out how they just maintained their sit and calm behavior. Jeff asked me if I wanted to see a demo on Morgan and I agreed. I was impressed that he was able to keep her focus and have her work around his two dogs without lashing out, this normally took weeks of conditioning her to the other dogs in a classroom and still she was not reliable. I watched in awe as he worked Morgan with barely a whisper. He was talking to her as if she was his best friend. There was no hauling on her leash, dominance rolling her, screaming at her, ignoring her and all the other things that I had been taught that hadn’t worked at all! What really peaked my attention though was when we started talking about a boxer picnic that was to take place 2 weeks from then. I told Jeff I would be attending but without Morgan. He asked me why? I wasn’t sure if we’d just been in the same room, hadn’t he just seen my dog lunging and growling at his dogs. He told me that if I was willing to commit to the training I could take Morgan to the picnic. 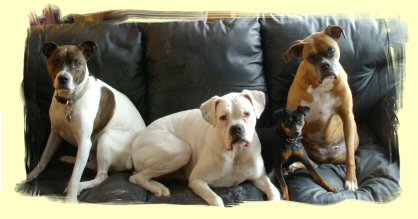 I went home and spoke to my husband about it. I’m not sure to this day if we signed Morgan up because we believed what Jeff had told us or if we simply desperately wanted to. Either way we were so happy we did it! During our appointment Jeff taught us a more clear and precise way of communicating our commands with Morgan. He did not allow us to raise our voice (which is something that happened a lot during an outing) and he told us to have FUN! Probably 2 or 3 days after we started training I took a big leap of faith and walked Morgan in to Petsmart (something we had not attempted in months). Morgan was so well behaved in the store and then in line at the cashier a lady came up behind us with a dog. The fear and panic began to take over but then I remembered our training and Morgan held her sit, she didn’t growl, she didn’t lunge, she didn’t even whine she just watched us for her next Q. It was at that moment we realized things were changing. 2 weeks later Morgan attended the boxer picnic. Not only did we attend but we both had a great time! She did not growl, she did not lunge, she did not bark and she listened to every command I gave her.

Since then there’s been no stopping Morgan, we started going to the park, for walks on the beach and hikes in the woods. In a very short time we knew we could keep Morgan off leash and didn’t have to worry about her when another dog was around. She’s just grown by leaps and bounds, she’s a visiting pet with BC Pets and Friends, she was featured on Animal Planets Pet Awards, she’s the reason I got involved with Boxer Rescue, she’s the reason I co-founded Without Borders Boxer Rescue and most of all, she’s my best friend!

In 2005 Morgan experienced a blowing set back to her training, she was diagnosed with lymphosarcoma. We were fortunate as she is the only documented case they could find of this form of cancer starting in the bone and not an organ. Normally this cancer is very aggressive and fatal. Morgan’s rear leg was amputated and after only a couple of days at Critical Care I received a call to come and take her home as she was bouncing 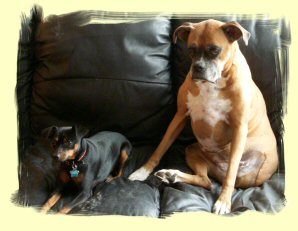 off the walls. In some ways it was harder for us to adjust then for her but the hardest was when we first walked through the door. When her siblings came to greet her she panicked, screamed and ran. I was devastated but after a night of rest we just returned to day one of training. She was fearful, her life had been turned upside down and she needed the calm, control we could give her to help her through. In record time Morgan bounced back to the happy go lucky dog that she was, thanks to our previous training! She is now almost 3 years cancer free and people can’t believe that she wasn’t born on 3 legs.

We whole heartedly thank Jeff for the training he taught us. In a very short period of time he gave us what no other trainer could, he gave me my dream back, he gave me my dog!