We got Maggie from the SPCA at the approximate age of 2 years. We were told that she was a gentle dog, great with kids and cats – she seemed perfect for our family.

As I said, she was a gentle dog, and was wonderful inside the house – completely house-trained, listened pretty well, even did a few tricks. Outside was another story…My first clue to Maggie’s ‘style’ should have been how she ended up at the SPCA in the first place – she was found roaming the streets. This became our signature problem.

Maggie liked to run and she would run fast and far every chance she got! She knew that once that leash was off, we had next to no hope of catching her. We would yell after her and she would completely ignore us.

In the beginning, Maggie would approach other dogs with a wagging tail, happy to find someone to play with. But, over the course of one year, she was attacked three separate times by other dogs, each one serious enough to require medical care. She began approaching other dogs on the defensive, ready for battle, just in case. Every encounter with another dog made me extremely nervous. 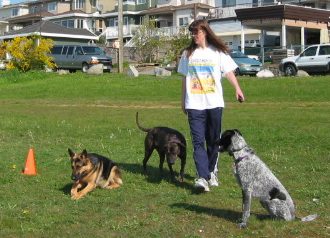 We also had a lot of problems walking her on the leash. It was a constant, frustrating battle for control. She would pull and bolt after other dogs, which often frightened their owners. My daughter was never permitted to hold the leash for fear of injury if Maggie suddenly caught sight of another dog and took off. Maggie also had a dislike for cyclists, skateboarders and rollerbladers!

Family outings were also difficult. Since Maggie is a part of our family, we wanted to take her with us everywhere. Unfortunately, many of our family trips (which we mostly geared to the outdoors so that everyone could enjoy) were disrupted due to Maggie’s behavior. Sometimes we had to put her in the car while we finished our event, many times; we just packed everyone up and came home.

While in the car she never listened either. She would fly across the backseat, all over my daughter, in a bid to get near and bark at, any dog that came into view. It was annoying for me and painful for my daughter.

When we first met Jeff, we had been struggling through Maggie’s behavior for about 2 ½ years. After just an hour working with Jeff, Maggie was beginning to listen. After two weeks of training, I took the leash off for good!

Maggie is like a whole new dog. Jeff’s techniques and his park sessions have made such a difference. She will now sit, lay down, and heel using both verbal and visual commands – and from a distance! She absolutely loves park sessions and we both have so much fun with the other dogs and their owners. Her tail wags incessantly and she even talks to me sometimes. The park sessions have done wonders to re-socialize her with other dogs. I no longer worry when we approach other dogs on our ‘off leash’ walks; I know Maggie will act appropriately. 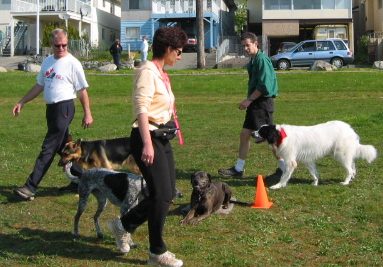 Maggie actually seems so proud of herself now when she listens. I don’t recall her being this happy, her tail is always wagging and she has this look in her eyes that say she is loving life!! Those outside activities that were once stressful, are now so relaxing and a lot of fun, for both Maggie and our family. I cannot believe that we waited as long as we did before contacting Jeff!!