We bought our English Golden Retriever from Walk about Acres, in Carston, Alberta. He was eight weeks old when we picked him up and already trained to “come” on a whistle command. He simply followed us around. We named him Luther, which seemed to suit his personality. 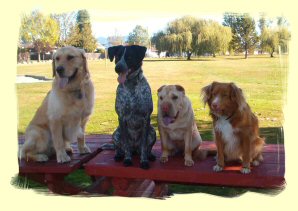 He was our second Golden Retriever and we were soon to learn that unlike our first he was a strong Alpha. Although exceptionally smart, he was also difficult to manage and continually wanted to pull us around. As he grew he became extremely strong and at times was aggressive toward other dogs, especially unneutered males, who were also not trained.

I trained him in the basics, but this aggressive problem was something that my wife Mary-Jane especially had a hard time with. In addition, Luther would not always listen to her and it was difficult to control him, especially around other dogs. A veterinarian hospital recommended Sit Happens so we gave them a call. Jeff came to the house and managed to get Luther to obey him in short order.

Although skeptical at first we quickly realized that this training method was indeed working.

After working with Luther for a week we could see the improvement and the ease in which we could train him. There was no raising of voices, no treats simply results. As Jeff pointed out to us his training method would not alter Luther’s personality or his inclination to become aggressive if provoked by another dog, but it enabled us to control him and to get him to understand that certain behaviour was unacceptable. 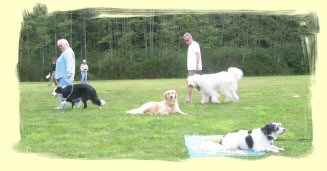 Training became easier, more enjoyable and longer lasting. Now Luther is a well trained Golden Retriever and a pleasure to take for a walk. He has learned never to cross a street or alley without permission and he is easily controlled off leash. I have used many different training methods on various dogs that I have had, and I can truthfully say that this method is the easiest, quickest, and surest way to get results that you need in order to have a reliable pet that is safe to walk in the City without having to worry about him going into the street or running after other dogs or other animals. 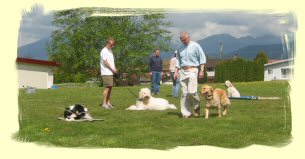 Jeff is an excellent trainer and instructor and spends enough time with you so that you are comfortable with the technique. He even managed to get Luther involved in a movie that was being filmed by a local company. 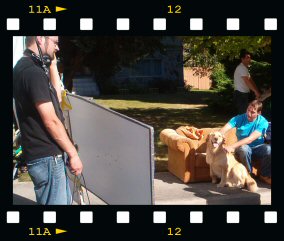 Apparently all the training payed off and he appears to have been a successful screen star.

We could not be more positive about the training technique and, more importantly, the results. Many people have dogs that they think are trained and will listen in the privacy of their home and when they are in the mood to listen. Myself, I don’t think a dog is trained unless he listens to you under the most adverse situations, that is, while playing in the middle of a pack of other dogs, I expect Luther to come when called. 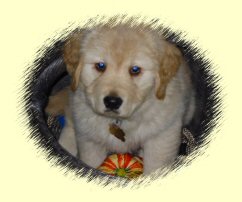 If you want a well trained dog in the shortest possible period of time in a calm environment with one on one instructions then I highly recommend Sit Happens.