All of our lives, my sister and I had wanted a dog. However, with a father who had a paper route as a child, he was absolutely against ever getting one. For on his paper route, dogs of all sizes snapped at him, chased him, barked, – you name it.

So on Christmas morning, the last presents that were opened by my sister and me contained a single piece of paper, and on that paper was the news that we were getting a puppy for Christmas.

My sister and I couldn’t believe it – we were positively ecstatic. But my dad was quick to say that it would have to be a well trained – and, more importantly, house-trained – dog. Of course, my sister and I agreed to whatever terms were thrown at us with the fact that we were finally getting a dog after fourteen years.

My mom found a breeder and pictures of our little ball of fluff online and we were on our way to the breeder who explained all of the essential habits to keeping a dog including baths, combing and feeding. It was a long time before we left his house, but when we did, we had our little miniature havanese all set for a new home. 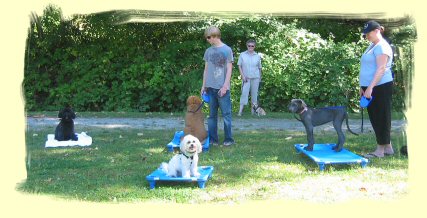 The first thing we did was set aside a little area in the kitchen. With it, we threw down newspaper and set up a little cage for her… since she wasn’t house-trained yet. In her makeshift cage, we had food, water, a pillow, tennis ball and a box, which acted as a litter box.

The first time we took our little puppy to the park, we were terrified of the much larger dogs. Lucky was barely seven pounds! Every time we sensed even the most remote signs of danger, we scooped her up as she let out her little bark.

Accidents in the house were becoming more and more frequent, now. And she was still trying to attack other dogs when we would try to bring her out. We weren’t even sure if she recognized her name. Clearly, she was not living up to my dad’s expectations.

It was my dad who found Sit Happens. We called as soon as we could and talked with Jeff who listened patiently to everything my mom had to say and to the rants my dad would go off on. Lucky seemed to take to him, too.

We signed up the same night and a week later, Lucky went through her first lesson with Sit Happens. The first thing they did when he came into the house was remove Lucy’s chicken-wire fence, promising that we didn’t need to keep her in it to avoid accidents. We were skeptical, but committed to following the trainers instructions. We then taught Lucky the “come” command and within the hour, Lucky was listening to us for the first time. She was coming when we called her, recognizing her name and we began to house-train her with amazing results.

Another week went by, and we taught her place. Lucky did a lot of sulking at that lesson, but now she even puts herself in place! Once she was old enough, we immediately signed her up for outdoor lessons. Through those lessons, she learned sit, down, and heel. Where before, walking on her leash was its own continuous obstacle course of tangled leashes, and Lucky crossing in front of us, she now follows along at our pace with or without the leash.

And the puppy play-sessions were a huge help, too. The first session, Lucky layed down and didn’t know what to do when the other dogs came to play with her – she was scared to death! With Jeff encouraging all the dog owners to keep walking in a circle, at first we couldn’t let Lucky alone – but within minutes she was running and playing with the other dogs. Now, her best friend at play sessions and outdoor lessons is Cash, a Doberman about ten times her size.

Now, when we take her to Buntzen Lake, we no longer worry about the big dogs. We even let her run around with them off leash, in the water, on the sand. She doesn’t bark when the doorbell rings and her accidents have gone away. 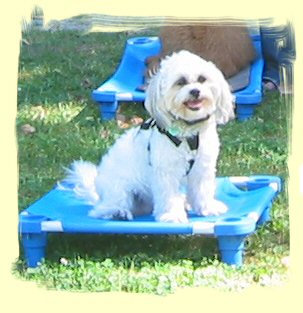 For the first time in his life, Dad actually likes dogs! Thanks to Sit Happens training and coaching, we all enjoy Luck’s companionship. Sit Happens had promised during the first session that after completing the initial training sessions, Lucky would become another member of the family – and they were right: we bring Lucky with us wherever we can, confident that she will behave and we will all have a good time.

Thanks Sit Happens! Because of your training not only do we get to keep Lucky, but we all love her to death and can’t imagine life without her now!