As a young puppy, 8 week old, Leira inherited this “old couple” who did not live in a shoe, but an apartment! They loved her, and she loved them, as well as everyone she saw in the building hallways and elevators.

Her “loving” became troubling to say the least — including “jumping up” and “nipping” at everyone in sight.

Meanwhile, the “old couple” happened to go for a walk by Glenn Park in Coquitlam. And what to their wondering eye did they see, BUT Jeff training many different sized dogs. There was Chance, Jordan, Emma, and Spike, to name but a few — such a diverse group! Surely this trainer could help us educate our dog experiencing the “terrible twos!” Sheepishly, we introduce ourself to Jeff — with his usual “twinkle” he was interested in helping the “old couple.”

Then the process began!

The first noticeable improvement in Leira’s affectionate behaviour was in the elevator. As her licking of faces declined the seniors of the manor were very impressed. What a fine dog they were heard to exclaim.

As time progressed the “old couple” and Leira learned many commands such as sit, come, down, and later stand.

But the best of all was PLACE. Now people can visit in the “old couple’s” apartment and Leira participates from her place where she receives many pets and loves. Now that the training has been in place for a few months –oh what fun!

We can travel together as a group of three and the trouble we get into is caused by the “old couple” not Leira.

Thanks Jeff! This has and is working beyond our expectations. 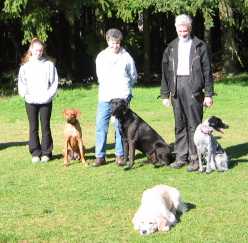