For years we had wanted to get a dog, so when our schedules finally settled down to allow us to get one, we were extremely excited to start the process.

Agreeing on an English bulldog was not difficult at all, as this breed is loyal and have great character around kids; not to mention adorable and funny (looking). They require minimal exercise, which definitely suits our lifestyle.

English bulldogs can also be very stubborn, but like with any dog, it depends on the training and your own commitment to keep the training current.

Our next challenge was to find a reputable breeder; someone who raises the puppies as their own in a home environment. We found such a breeder in Alberta and contacted them. Coincidentally, they had just had a litter a week prior to my call. We had our pick of the litter and made arrangements to have photos sent to us weekly while waiting for our puppy to be old enough to come home. It was a long 8 weeks I tell ya.
I have had dogs in the past while growing up but this would be “my/our” first dog. With that came the responsibility of training, vet visits, and even insurance. We researched and researched to prepare for Lacey’s arrival.
8 long weeks later…

We picked her up at the Vancouver airport since she was flown in from Edmonton. Upon arrival, we did everything that people, books, and TV shows suggest. We found a quiet area not far from the airport, placed the crate on the grass and tried to coax her out. Well that didn’t work. We figured that the airplane flight and noise really shook her up. We decided to quietly remove the upper half of the crate. We waited patiently until she was ready and after 20 minutes, she finally began to move about and explore her new surroundings. We headed home with our new puppy and over the next few weeks, we began the potty and crate training process.
One day while out for pet supplies at a big box store, we were approached to sign up for their in-house puppy training classes. Thinking why not, we signed up. It could be argued that yes, maybe she did learn something from the classes, however we feel that the instructor’s approach to rewards by giving dog treats would lead to problems in the future.
As Lacey got a bit older she became stubborn with her walking. Bulldogs are not known for their athleticism. We had a hallway in our condo building which was probably 60ft feet or so. Its like she would come out of our unit, look down the hallway and think, “thats just too far….” and lay down. I actually filmed it and its on youtube. During walks there would be times when Lacey would just lay in the grass and not move. We would end up dragging her and she looked like a lifeless alligator with her legs folded back and being dragged on her belly.
Everybody in our complex loved Lacey. She enjoyed meeting people and ignored most dogs. Once she had her mind set, she would begin to pull whichever way she wanted to go, whether it was to see someone she knew or even just back to the front door because she wanted to go home. 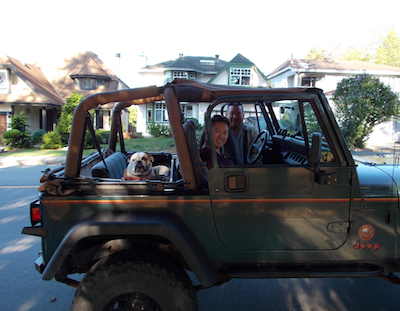 We concluded that we were unable to further train Lacey without assistance. We didn’t value the direction the bog box stores were going with their training so we began researching for alternatives.

We came across Sit Happens!, started to read their “Puppy of the Month” and watch their videos. We were quite amazed at how well-trained all the dogs looked.

Also, the dogs looked like they were having fun in the classes. We decided to contact Sit Happens!.

We first met up with Marilyn at a local park. We discussed the challenges we were having with Lacey and Marilyn confidently told us that they could help. She then brought her dog Flirt out of the car and demonstrated how she is able to handle Flirt even without a leash. At the time, we didn’t realize that was the goal of Sit Happens!; to assist you and give you the ability to walk your dog off leash with confidence.
We saw immediate results in our in-home training sessions with Marilyn and Lacey. With her techniques, we were able to conquer the hallway the first day! During these sessions we were also able to discuss specific issues we had around our home. Whether it was the hallway, pulling, claiming the bedroom as ours, or puppy biting, we addressed them all.

Once she was ready for the main outdoor training sessions, Lacey’s training progressed quite quickly. Jeff and Marilyn explains to us how dogs act and react to many different situations, so we were able to correct Lacey’s behavior effectively. Through training, Lacey has moved past our previous issues. She now receives a lot of comments on how well she is trained and acts both around people and other dogs. We still attend class drop-ins when we can and honestly, she loves seeing Jeff and Marilyn and being there. 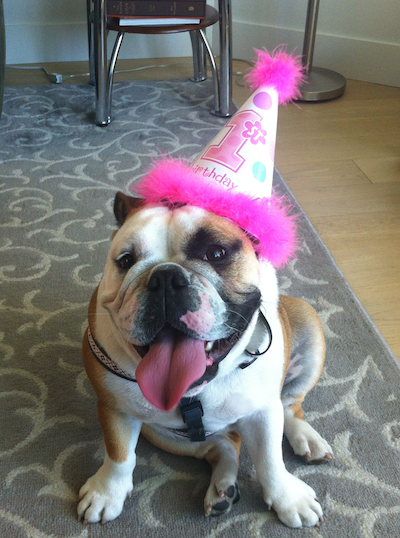 They’ve enable us to enjoy Lacey and her breed characteristics for the right reasons.

If you get a chance to meet her in class, she has one heck of a personality.

We can’t thank Jeff, Marilyn, and the Sit Happens! team enough.
Thanks for everything,
Adam, Anmy, and Lacey
X
X