We had put off having a dog for many years. But after moving to BC, we finally felt settled enough   to give it a try. Unbeknownst to our kids, we started looking for a pup, trying to find one that would fit our seemingly mutually exclusive needs for a dog. Peter had always wanted a big dog, a “real” dog (he had a Norwegian Elkhound as a kid) and Karen wanted a smaller dog, an “accessory” dog that she could hide in her purse and take everywhere, and to which she wouldn’t be allergic. The kids just wanted any dog.

Somehow we ended up with Kona – a big standard poodle. Here’s how it happened: Karen searched the web and found Paris Poodles (www.parispoodles.com) in Chilliwack. While the kids were at camp last summer, we paid a visit to Joanne Paris and her new pups. There were three beautiful pups to choose from: a black female, a chocolate male, and a red male, all about 10 weeks old. The red male was perfect with soulful eyes and wonderful colour. Joanne breeds poodles not for show (although her dogs are beautiful), but more for search and rescue and as terrific companions. They look like “real” dogs and most owners keep them in a “puppy” cut to avoid the typical frou-frou look of poodles. A few days after the kids returned from camp, we told them we needed to go visit friends in Chilliwack and they had to come along. When we arrived at Joanne’s kennel and home, there she was, standing with the (now 16 week-old) puppy out in front. The kids said, “Oh, what a cute dog”. We got out and told them we were taking him home and they couldn’t believe it. Neither could we! After so many years of telling them that we couldn’t have a dog, our children just

couldn’t get their heads around the fact that we were taking a puppy home with us.

With an 11 year-old daughter and a 15 year-old son, our lives are chaotic enough and the last thing we needed was more chaos. We had Kona for only one day before we surrendered, took Joanne’s advice, and immediately called Jeff 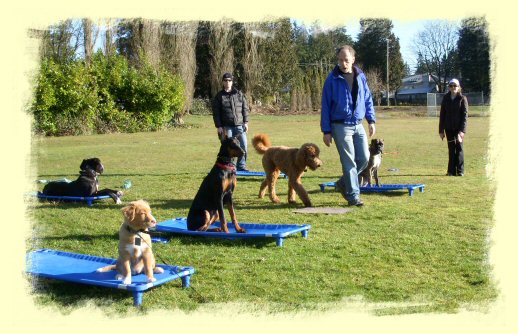 from “Sit Happens”. He came to our house with his doberman, Cash, and we were impressed at how well he could manage the exuberance and energy of his dog. We signed up then and there. The first few days were hard and we wondered why in the world we had invited a pup into our lives. We had planned a late-summer trip to Tofino and we soon learned that there was no way we could handle the puppy, now (after much debate) named Kona (for the area on Hawaii, not the bikes!) on a camping trip, so we dropped him off with the trainer for three days. They did wonders with him in our absence and we came back hopeful that we could learn to manage this pup.

The change from a nearly uncontrollable puppy to a well-behaved puppy was incredible. Kona’s behaviour only continues to improve with the training sessions at the park. We know that poodles are smart, but the training provided by Sit Happens has made life with Kona less chaotic, and certainly more joyous. Kona walks at our side on and off the leash. We go on long hikes together and he is never out of sight. He restrains his puppy enthusiasm for new people until given permission to give a hug.

Peter takes him to work several times a week and everyone comments on how well behaved Kona is. Sure, he still likes to look in the dryer for a sock and makes off like a shot when he finds one, but, using the Sit Happens approach, he drops it every time when we say “off”. Like Jeff says, the program doesn’t turn dogs into robots. Kona still has his own distinctive character and (sometimes mischievous) behaviour. But Kona is calm, attentive, responsive, and a real delight to be with. 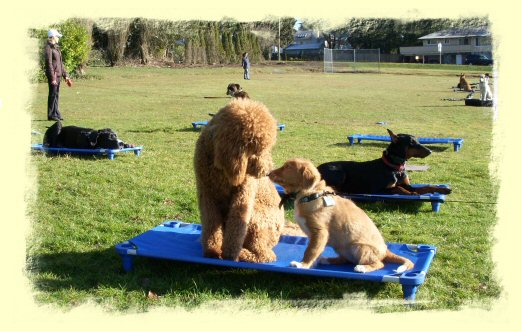 On Halloween, we took Kona trick-or-treating with the kids and then to the fireworks in Anmore. Everyone 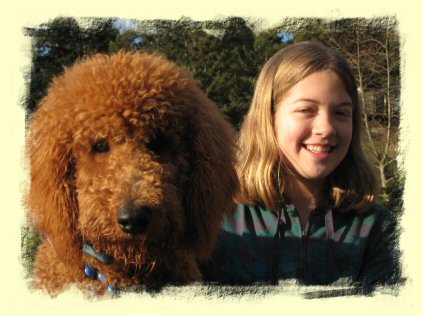 around us was concerned that the noises would upset our dog. Kona surprised us all by lying down and falling asleep during the fireworks. No, he’s not deaf, just very well-behaved, very secure, and very calm thanks to Sit Happens. Thanks! We are delighted to be part of the Sit Happens family, and so is Kona. We have told many friends about the program and a few have even signed up.

We wouldn’t hesitate to recommend Sit Happens to anyone. It has made our life with Kona completely enjoyable.