Today was a VERY GOOD DAY! I would go so far as to call it exceptional!

I just got back from walking my THREE (3) dogs in the park and we had a wonderful, fun, stress free time and Sherman & Kirby were OFF LEASH ALL OF THE TIME!
I had people comment on how well behaved they were, they were able to run and play with a few other dogs, and I was able to toss a Frisbee for Sherman. This was only possible because of SIT HAPPENS and the help that we have received from Jeff.

Yes, we have three dogs! Three dogs, three different personalities and ages. Shasta, 14 years old, Kirby, 2 years old, a Westie mix, and Sherman, a 1 year old Westie. Shasta and Kirby were typical as far as their behavior went. Most of the time they did what we wanted and we were content. But this story is about SHERMAN our youngest, or as I used to call him “HELL BOY – THE SEQUEL!”

We got Sherman to be a companion for Kirby because of the big age difference between Shasta and Kirby. Little did we know that our lives were about to become utter chaos.

Sherman didn’t start out in the best of situations. I remember feeling like we had rescued him when I finally picked him up. I don’t think he had been socialized at all. But, he was so CUTE and just right away made it very clear that he was here, and promptly plopped himself down with the other dogs and stuck with them whether they liked it or not. He had arrived and that was that!

I think he was cute for about a week! By that time I knew we were in trouble! He was into EVERYTHING! The only time he responded to anything we had to say was if it was something he had planned to do anyway. None of the things we had learned in training our other dogs worked because we couldn’t get him to pay any attention to us. To compound the problem he was what I call an EXCITED PEE-ER! So, not only was he out of control, he was constantly making a MESS! We were screaming at him most of the time just from sheer frustration. I’m sure our neighbors thought we were having domestic disputes because it got so we were always yelling. As Sherman got older he got worse instead of better. 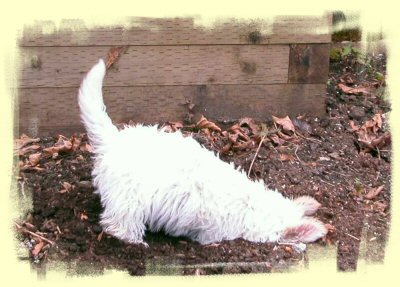 We have a big yard and it got so bad that we had to WALK HIM AROUND OUR YARD ON A LEASH or he had to be tied up because that was the only way to control him. If we let him out on his own, something would set him off and that was it. His barking got so bad that once he started, we couldn’t get him to stop until we could catch him. Walking the dogs turned into something else we couldn’t do. Because Sherman’s behavior was so bad he started getting our other dogs all worked up and if we ever met dogs on our walk we almost had fights. The other dogs could be on the other side of the road behaving very well but by the time we passed them they were usually pulling their owners towards us and starting to misbehave. It got so some people would actually turn and go the other way if they saw us coming. With all three dogs now misbehaving walking was out of the question and we became home bound.

I can’t begin to express just how stressed and miserable I was since I was the one who spent most of the time with Sherman. I also felt responsible because I was the one who had really wanted to get another dog. I remember scheduling him to be neutered when he was 6 months old (to the day) because we were counting on that calming him down. He came home from that experience and acted like he had been away at day camp. We didn’t even get a recovery period break; he was on the go again from the time we got home. I’m sure most people felt that if he was their dog things would be different and that we were just bad owners, but no one jumped in with any ways to help except to say that he would probably “grow out of it”. Before I went through this I would probably have thought the same thing. Now I know different. Sometimes you need help!

I knew we had to do something when things finally got so bad that I had to let him be outside barking ALL DAY because I was so stressed I was afraid that if I got my hands on him I would probably harm him just from sheer frustration.

I contacted our vet and they recommended Jeff and SIT HAPPENS. I checked out their website and read ALL of the puppy of the month stories. All the stories had behavior problems but none had the peeing problem so I was skeptical since that was a major concern for us. I remember a friend coming over and while he stood in our entrance Sherman was running around peeing & barking and we were yelling and chasing him.

It was utter confusion and embarrassing to say the least. Another time he peed all over another friends pants& shoes because he was jumping up on her and peeing the whole time. These are just examples of what was happening many, many times each day! I actually had to make up a diaper he could wear because we couldn’t trust him at all if anyone came over.

We had to do something so I decided to contact SIT HAPPENS. Since the peeing was a problem that really turned everyone off and was making it impossible to socialize him I decided to start with that. Jeff called and said that yes, he could help. I told him that Sherman was really bad and that he wouldn’t be able to get near him without getting peed on. Jeff suggested we have him outside on a leash when he came to avoid all the mess but since that had never stopped Sherman from jumping up & peeing before I figured Jeff would get a true picture of our “problem dog”. Jeff came in our yard and Sherman was excited but he didn’t pee on him. Jeff talked to us for a bit explaining his methods and assuring us that he could help. He showed us his methods with his own dog and then he took Sherman out on the street in front of our house to start working with him. Jeff seemed so confident but I knew that Sherman was going to be the one dog that would get the better of him. Within minutes we were standing there in utter amazement as Jeff had Sherman walking up and down the street on a flexi leash and he was behaving. We were in shock! When Jeff asked if we wanted to be part of his program we both signed up immediately! He left after scheduling a one on one training session IN OUR HOME at a time that FIT OUR SCHEDULE. Since we were having problems walking all the dogs we decided to sign up Kirby as well because having only one dog on the program seemed like it might take longer to get control.

Our session was in the evening and lasted about 2 ½ hours. Jeff taught us about the program and worked with us and both our dogs until he felt we had learned what we needed to do until we could get to a class. We learned the basic “come” and “quiet” commands that night so it seemed like a good start. The NEXT DAY I let Sherman out in the yard and I expected him to start his crazy barking because a man was walking past our fence pushing a stroller. I will never forget this moment as long as I live! Sherman ran up to the fence, almost skidded to a stop and let out kind of a whine like he wanted to bark but knew he shouldn’t. When I called him, he came! I couldn’t believe it. I called my husband at work and told him to “just listen.” He said he couldn’t hear anything and I told him that SHERMAN was outside and there was silence! I spent most of that day just watching out the window and wandering around the house in disbelief at the change in Sherman.

That was the start of a wonderful experience for us and all our dogs. Sherman isn’t perfect (yet) but the results we have seen are amazing! He still has the occasional “accident” but with the training, he can now be a part of our activities and my husband no longer has to sit in the dog pen with him to keep him under control when family and friends come over. 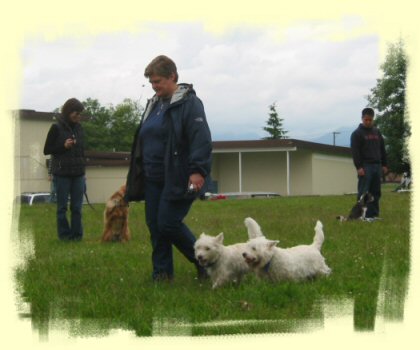 When you sign up with SIT HAPPENS you sign up for a lifetime of training with that dog. You can go to the classes and work with the group or if you need help with a specific problem Jeff  will work one on one with you. If he can’t help you in class, he will give you things that you can try at home. Jeff is genuinely interested and cares about how you and the dogs are doing.

When we take a dog into our home we make a commitment that we will be responsible to that dog for life and that includes doing what’s necessary to make them a part of our life. I couldn’t imagine spending the next 15 years or so with Sherman the way he was. I never thought I would consider getting rid of a dog but I have to admit I did with Sherman. I think the thing that stopped me was that I knew if we couldn’t handle his behavior, who would? I was afraid he would end up neglected or worse yet abused if someone else experienced what we were going through. 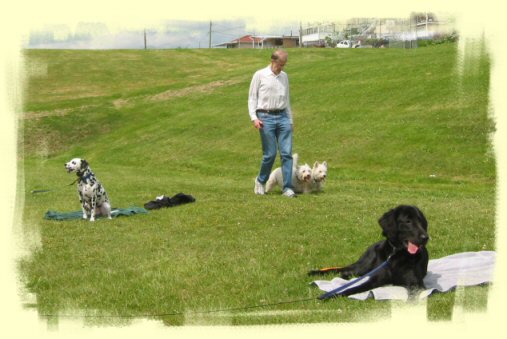 I am so glad now that we found Jeff and SIT HAPPENS. I would recommend SIT HAPPENS to anyone. If you are reading this and it’s because you are considering asking Jeff for help with something don’t wait like we did. Get the help now; you will be amazed at how much better things will be. 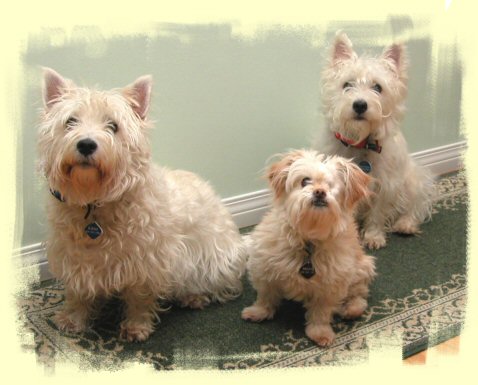 I think what I love most about the program is that my dogs are happy. This program does not break their spirits or use any harsh or cruel methods.

I ENJOY my dogs now and life doesn’t get much better than having a day at the park like I had today.

Thank you Sit Happens, you gave us back our life!