I have been fortunate to grow up with dogs my whole life. After losing my dog of 16 years, I decided I wanted to give a loving home to an adult rescue dog, and that is how I found Joker. I searched for a few months, and one day saw a sweet smiling face on Pet Finder that I couldn’t scroll past. After contacting the rescue, I found out he was actually located in Texas; after many calls with the coordinator and seeing video footage and more pictures, I took a leap of faith and decided to adopt Joker without having the chance to meet him.
Before being flown from Texas to Vancouver, Joker had a rough start. He was thrown from a vehicle onto a highway, and after he was taken in by a rescue group, he was passed up time and again for adoption because he wasn’t the prettiest pup in the bunch. I don’t know much else about his history, and when I adopted him they said that he had basic manners, was housetrained, and did ok off leash as long as he didn’t get tempted by cats – which all seemed quite manageable to me.
Not long after I had Joker, I signed him up for obedience class and soon learned that he was going to be more of a training challenge than I anticipated. His personality and disposition were fabulous, but he had a bit of a stubborn streak and cheekiness when it came to doing things he wasn’t interested in. While the class helped with a few commands, Joker ended up failing. During the same month as our failed attempt at obedience, I learned the hard way that Joker’s recall wasn’t rusty around cats, it was in fact totally non existent.
After an escape at Buntzen Lake (times 2), a dash around my parent’s neighbourhood, and a solo adventure at Bert Flinn, I knew I had a serious problem on my hands. Joker was constantly looking for escape opportunities, under fences, out open doors, and even managed to break a leash. I was so lucky to get him back each time without serious incident, but knew it was an accident waiting to happen. Safety aside, I also wanted a dog that was well balanced, happy, and able to enjoy the wonderful trails and beaches BC has to offer without being attached to a 6 ft leash.

I spoke to a few friends and was recommended a private trainer, and was excited at the chance to have someone to work with me and Joker one on one. After our initial consultation, I was a little unsure that the training methods would work for us, but I gave it a go anyways. The trainer said that I would need to be patient and expect to use the long line method for up to a year before letting my dog off leash. A few weeks of dragging around a long line and carrying hot dogs in my pocket got me nowhere – Joker successfully snapped the lead on one of our training walks and it took me 3 hours to get him back. After reaching out to the trainer, she said that I had to be understand that my dog might not be able to be off leash, ever. 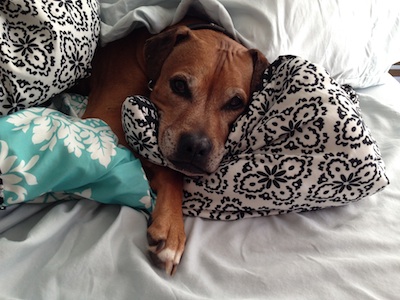 While I respected her efforts, I wasn’t willing to accept that as an answer. I did some more researching, and decided I wanted to try remote collar training – enter Sit Happens. After meeting and explaining my situation to Marilyn, she was confident their training system would work for Joker. After his first consultation, Marilyn said that it would take two sessions and two classes to have Joker’s foundations down, after which he would be ready for off leash training and adventure. I was skeptical of this timeline, but was 100% committed to our homework and followed all of the direction and advice Sit Happens sent my way.
Just as Marilyn and Jeff promised, at our third group class Joker was off leash in an open field. He didn’t try to bolt, wasn’t checking for escape options, and went through the obedience paces like a champ. I was so happy I almost cried and was in disbelief for the rest of the morning. Within one month, Sit Happens was able to do for my dog what other people had said was impossible. I am so happy to be able to say that we have now enjoyed many off leash hikes and beach adventures, and have not had any run aways since we started our training. I was even able to send Joker on an off leash hike with a dog walker and a group of dogs he had never met – the walker reported back that Joker was perfect, and better behaved than his own dog. 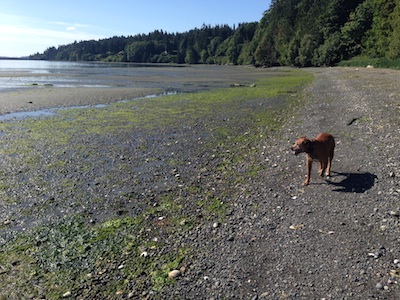 Training with Sit Happens was the best decision I could have made for my dog, and I will be forever grateful for their assistance in transforming my dog from a professional runaway into a happy dog with awesome recall!