This is our story about Hunter.

We had just lost our six year old Yellow Lab to cancer and knew that we had to make room for a new addition to the family as we are “dog people”. Knowing that Yellow Labs were of even and quiet temperament, Hunter joined us in June of 2004 – that’s when our rude awakening befell us! 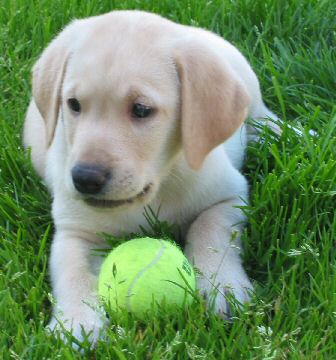 Although Hunter was curious as all pups tend to be, our first few weeks were basically uneventful; all was going well with our new addition; then something happened. Hunter started to get a mind of his own; sit meant nothing; come went over his head; down was a non-event. In short, our little puppy was turning into a handful of bouncy “hell on four legs”!
He’d bark and argue what seemed to be for never-ending spells; when that was over, he would then poke at us with his nose, bite our son’s white socks on his feet – which meant my son usually walked around without his socks until he would actually have to put his shoes on to go outside; he just wouldn’t park his little butt for even two minutes, continually pacing the whole day – the kennel was our only relief for a moment’s peace! The counter surfing drove us crazy not to mention his jumping on the sofa for a comfortable place to rest. No amount of coaxing, no amount of cookie bribes would work; we started getting worried that we had lost our training touch and would be saddled with an uncontrollable dog. Walking on a lead and healing were totally foreign to Hunter – which meant he lost out on a lot of walks. It was becoming a real chore to have Hunter around. 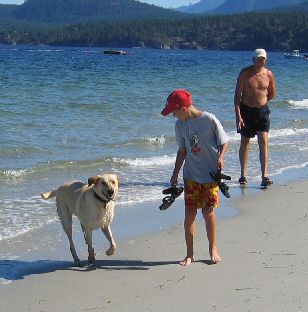 Janet started saying she now knew and could understand why some people got rid of their dogs – and we were seriously looking at that option for Hunter. By this time it was October and Hunter — “the demon dog” – was just turning 6 months old, when we heard about Jeff and Sit Happens through our local vet. We remember Jeff laughing when Janet gave him the grim details of our plight with Hunter and she said “… but he’s so darn cute”!

What impressed us immediately once we met Jeff was his calm and pleasant manner when he discussed his “guaranteed training methods” – all during which Hunter was being his usual pain-in-the-neck self until we had to put him in his kennel. We paid close attention to what Jeff had to say and then were even more impressed when after only a few minutes with Hunter in our cul-de-sac was he able to get our pooch to actually listen and obey – simply amazing!

We have worked hard with Hunter and we have seen the Sit Happens success; Hunter enjoys his training immensely and can’t wait to get there. We can’t wait until September when he will start the agility classes. We can now walk Hunter off his leash and he heels – yes HEELS! When company comes over, glasses and chips don’t go flying as Hunter obeys his sit and down commands. He loves to play outside with the kids in the front of the house and because he behaves, he is able to be running around loose and will come when called. He’s turned into a joy to have and our friends are thoroughly impressed with him. We would recommend Jeff’s Sit Happens training to everyone; we are just sorry that we didn’t start earlier with Hunter to save ourselves the tears and grief we went through for those many months. 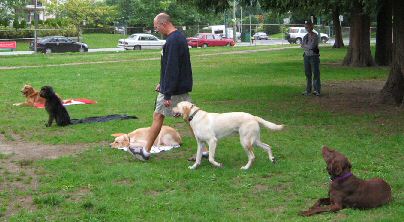 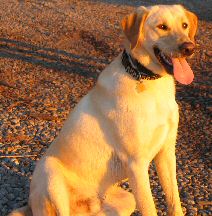 Hunter is truly our puppy of the month – every month – and he is SO DAMN CUTE!
When it comes to adding another dog to our family, we will start right away with training the Sit Happens way and save ourselves much aggravation.