Most people have never heard of the Boerboel breed, and neither had I until I saw one in an episode of the Dog Whisperer. We own a 13 year old female Boxer named Bella and figured we would be forever a Boxer family.
There was a Patti Labelle episode of the Dog Whisperer with her “problem” dog, Nasir. Nasir was a 150 lb male Boerboel that wasn’t a problem dog at all, he was a neglected dog. He looked like a Boxer on steroids. He seemed so calm to me on the show, I had to learn more.
I spent the next 2 years researching the breed and learned they are considered the “king of the guard dogs.” Boerboels are South African Mastiffs that despite their massive size and guarding instincts were actually bred primarily for temperament.

Boerboels have been bred as family protectors that must get along with and take orders from everyone in their pack. They are fearless protectors while being stable, confident, loving family pets. However, with males weighing over 150 lbs and females up to 130 lbs, a Boerboel owner is ultimately responsible for being able to control their pet completely because you cannot really manoeuvre them around by force; they have a 30% chance of defeating a lion in a one on one confrontation and are considered a dominant breed. A Boerboel owner has to control their dog mentally and without touch. 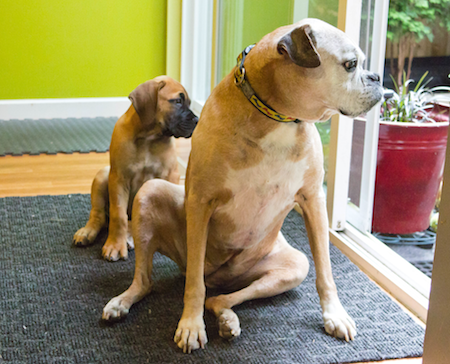 After a 2 year search, I found a local Boerboel breeder and arranged to meet him and his male Boerboel. Our entire family met the breeder at a secluded park and when he opened the hatch of his pick up truck, out leaped his 175 lb dog. I quite literally had never seen a dog so big and agile!Within 5 minutes he was playing with my 9 and 11 year old daughters and rolling over on his back when I massaged his front paws. I wanted one! The breeder had his first litter due in 3 weeks and all 6 puppies were accounted for, but we were invited to the viewing when the owners picked them up. We said yes and were eager to get in line for the next litter, and made it clear that if ANYTHING caused one of the puppy owners to back out, we would like one of those puppies.

2 days before the puppy viewing I received a call from the breeder asking if we were still planning on attending the viewing and if we were, could we do him a favour. One of the puppy owners had backed out the night before and would we still like to take the pick-of-the-litter home with us? I called my wife with the news, she cried tears of joy, and 2 days later we were the somewhat unexpected owners of a 9 week old female Boerboel we named Gugu – which means “precious” in Zulu. 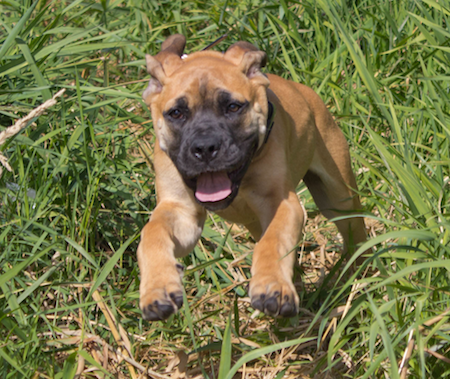 Gugu growled at me a couple times and wouldn’t walk on a leash the first few days we had her – oh no, what did I get myself into? I was very concerned I might have bitten off more than I could chew. I jumped on the internet and found “Sit Happens” and within 5 minutes of watching the videos decided, yup, that’s EXACTYLY what I want!

I met Marilyn and Flirt the next day and was so impressed with her and what I was seeing that I signed up on the spot. Marilyn was at my home the next week teaching the entire family how the program works with demonstrations, encouragement and re-direction. It was great, she was great, but Gugu wasn’t getting it…or maybe I wasn’t getting it, so I called for Marilyn a day or two later and got Jeff. He asked if I would be home later in the day because he could come over. Really?! Yes, please come right away! Jeff watched me work with Gugu then took over and explained what I was doing well and what needed improvement. He said Gugu was a drama queen and testing me and assured me I wasn’t harming her and equated her behaviour to a child throwing a tantrum at the grocery store. This feedback helped a lot. Both Marilyn and Jeff are so certain and firm in their approach to teaching; it’s clear they know what they are talking about and can assist you in becoming a strong pack leader. 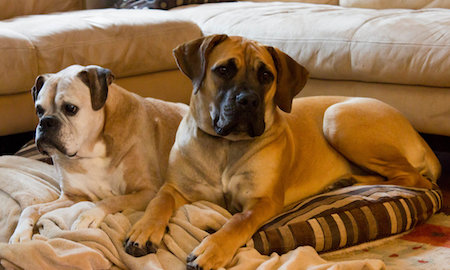 Within days, Gugu started getting it…or was it me? She was able to socialize with other puppies in the puppy play date classes and participate in the weekly training classes close to my house. With just 3 weeks of training, she was walking off leash in multiple environments.

Gugu is now 8 months old and 101 lbs. and very well socialized with people and other dogs. I am complimented on a daily basis on how well behaved she is. I honestly believe that because Gugu understands what is expected of her, what the boundaries are, and she is so eager to please, that she is a happier more content dog than she could ever have been without Sit Happens training. 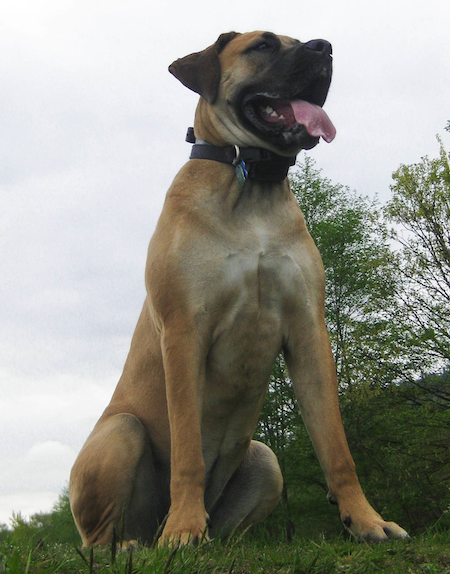 I learn something new EVERY SINGLE CLASS I ATTEND. I learn about dog feeding, dog psychology, dog body language, the importance of consistency, the list just goes on and on.

Jeff says it takes about 2 years to have a fully trained dog capable of performance on command in a variety of environments, so this isn’t a short term fix; it requires time and effort.

Thank you Jeff and Marilyn for your dedication and enthusiasm for helping dog lovers create wonderful relationships with their pets. I’m a raving fan of Sit Happens!