After the death of our cat in 2011 my wife and I decided that getting a dog would be a good change. The idea being that a dog would be more of a companion than a cat.So off we went to the 2011 dog show in Abbotsford. There we came across the Norrbottenspet breed which seemed to fulfil the traits in a dog that we desired, namely a good companion, energetic and excelled in doing outdoor activities.
The Norrbottenspet is a heritage breed originating in Sweden and Finland. However because of change in the life style of the people in the North the breed was dying out.
Sometime in the nineteen-fifties people in Sweden and Finland realized that they were about to loose a part of the heritage and made a concentrated effort in the ensuing years to track down enough dogs to re-establish the breed. While in those countries the breed is now well established, in North America there are only three breeders two of which are in Canada. Only the Canadian Kennels Association recognizes it as a registered breed.
As luck would have it when we contacted one of the Canadian breeders they had a newly born litter. After the talking to the breeder we bought a female pup called Freja (which means Goddess of Love and Fertility in Swedish).
The breeder however had warned us that this puppy had been the dominant pup in a litter of 5 females and that we might find her very strong dominant personality, a real handful and very hard to live with. In a fit of hubris we told the breeder that this would not bother us and if need be we would seek professional help. How little did we know that getting good solid professional help would be so difficult and a waste of time and money?

We took possession of Freja on Jan.6 2012 but from the very beginning she truly had a dominant personality. So off we went seeking professional help. From our readings we were aware that the training and direction you can give a puppy in the first 16 weeks can be crucial in how she develops as an adult.
The easiest way to sum up the training she received in the first 2 ½ months is that it left the puppy and the owner totally confused. One trainer would say one thing while another would advocate something else. In the meantime the behaviour of the puppy was such that she was trying to dominate us rather than the other way around. Sure if we give her treats and lots of them she would obey us but then once the treats stopped she would go back to try and dominate us. Everyday it seemed that we had less and less control. And the pleasure of having a puppy was fast fading.
Things finally came to a head in  March when on a walk the dog crossed in front of me and bit my wife of the back of her leg. We realized then we had to get control but the question was how. We contacted the breeder but her suggestion to roll over the dog until she submitted was too drastic for our skill level. As luck would have it we had to take the puppy to our Vet on another matter. In conversation with him regarding the puppy’s behaviour he mentioned that a colleague of his had used the services of Sit Happens and that she was very pleased with the results.

In late March we met with Marilyn in Burnaby where she discussed their training program and that it didn’t just last for a few weeks but carried on for as many months as required. Her presentation was like a breath of fresh air compare to what we had been experienced before. In April at the end of the two hours first lesson the change in the behaviour of Freja indicated that we had re-established more control over Freja than before.
After following her instructions of what to do during the period till the second lesson and after it our confidence to handle the dog had grown substantially. The outdoor sessions which followed only enhanced our feelings that Freja was now obeying our commands and that we were now firmly in control. 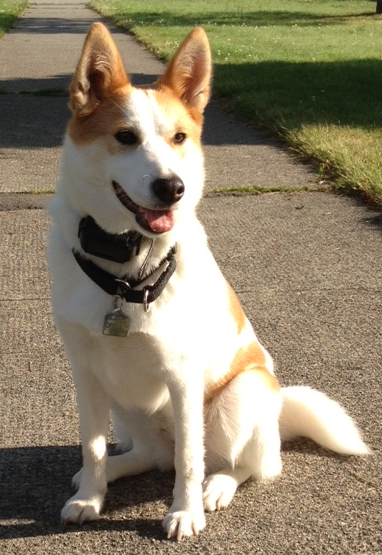 Sit Happens makes things happen that establishes the owner of the dog as the leader of the pack.

Thank you Marilyn and Jeff for your guidance and training methods, not only did you help train our puppy you also trained us in how to handle it.