My younger sister had always wanted a dog. She begged, whined, told our parents she would walk it, feed it, play with it and ultimately pay for everything, but met with defeat every time from Mom and Dad.

Showing up with a puppy would ensure getting what she wanted. So, September 16, 2005 a 12 pound Lab-Boxer cross showed up at the door of a completely unprepared household.

Coco,
named for the sweet and soothing drink,
had arrived.

In the months that followed Coco’s personality really grew, along with the rest of her. She loved to play and explore, but watch out… If she caught a scent of anything exciting, she would take your arm with her. Frustrated 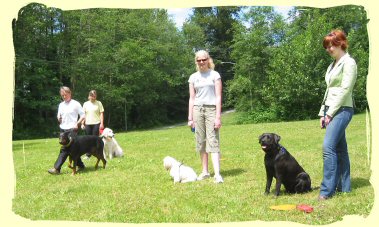 with her pulling we decided to try some off-leash trails. Coco never ran away, but was not willing to go back on her leash.

Once, we were on a trail in Lynn Valley (North Vancouver) where we’d had Coco off-leash before. On our way back we encountered a school field trip going the opposite way. That was fine, Coco would of course follow us, right? Nope, she became so confused she ran in the opposite direction of us to be the leader of the pack.

My Mom was in tears thinking we had lost the dog. As soon as we could catch Coco she was back on her leash and that was the 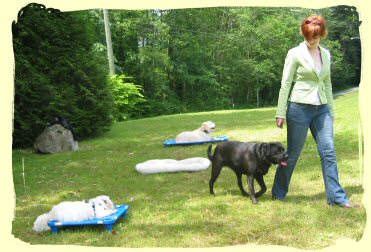 end of he off-leash adventures. For the rest of the summer Mom avoided the trails near our home and stayed away from dogs in the neighbourhood. Coco was just too big to control.

It was clear that Coco needed to be shown some manners. I do not live with Coco and therefore the training had to be simple and instant. I had seen the Sit Happens van in the neighbourhood and after a little research decided to give it a try.

Jeff and his dog Jazz came to our home one evening and gave an amazing demonstration. Then Jeff went outside with Coco and showed us the potential that she was hiding. Coco would gallop when called and her tail created hurricane winds when she was put in a sit.

Coco really loved that impromptu training we did with her.

After eight months, Coco is a puppy to be proud of. She is just as happy, loving and adventurous as when she first arrived. She has been traveling, camping and recently was my running partner in a fundraising run. Privileges she and I could never have had if not for Sit Happens. 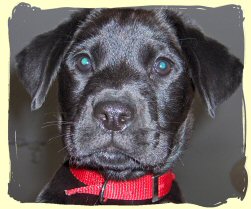 When I have a dog of my own, Jeff  will be the first person I phone. Because there is nothing more frightening to me than a dog without the support of the Sit Happens.