We got Chance, a Border Collie/ Blue Healer Cross, when she was 10 months old from the SPCA. She had been found wandering the streets, beat up, signs of abuse, and pregnant. After all she had been through we just had to give her a good home, and she was so friendly to people.

Well, we soon found out that her time on the streets taught her some pretty bad habits. She absolutely hated small dogs, distrusted almost every dog she met, disliked kids on skateboards, and was a constant scrounger.

We took her through both beginners and advanced obedience training (on-leash), and although she learned the commands she was still not an obedient dog. When we passed another dog on our walks she would launch herself to get at it, which can be very upsetting and embarrassing. We tried the pinch collar, and a Halti, which she broke to attack a small dog. We would have to cross the road to avoid other dogs on our walks. If we went to the school grounds I would have to keep her tethered to a 50’ long line while we played Frisbee, in case another dog came near. I was beginning to wonder what kind of life Chance would have since she would never be able to run free, and I really wanted a dog that I could take every where with me, and play fetch with.

Then I met Jeff. I will tell you that with his training and tools Chance is now a different dog. With 1 week of training we were able to go to a dog beach, have her off-leash, and be confident that should another dog happen by, there would be no problems. Just this past week-end at the park 3 small dogs came at her, I put her in a down, the 3 dogs investigated her, while she just laid there. The other dogs owner commented, “now there is a well trained dog”. Two months ago there would have been one heck of dogfight. 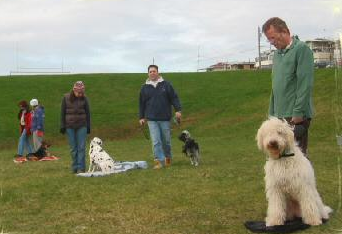 People who knew Chance before her training with Jeff are amazed at how different she is.

I no longer use a leash with her, ever, and our times at the park chasing balls, or Frisbees are worry free. I take her for walks knowing other dogs will be around and I know that my dog will do what I want her to do instantly, and every time. 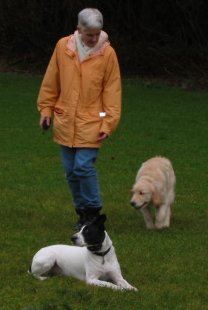 One thing that I would like to add, I have attended 5 different obedience classes, with 3 different dogs, and I have yet to see any dog truly “come” when called, after these courses. When they are in the real world there are so many distractions, and dogs know that without a leash their owner has no way of enforcing the “come” command. With Jeff’s training, coming when called is truly a reality for every dog, every time.

Thanks Jeff, for teaching me how to make Chance “mans best friend”.