Carmanah (named after the Carmanah Valley on Vancouver Island), had a rocky start in life. She was rescued from a drug house that sold puppies for cash at the age of only 9 weeks and taken to the North Vancouver District Animal Shelter along with her brother and sister (Harry and Sally) for adoption. This was a lucky break for all three dogs, and later for the mum as well.

We adopted Carma from the shelter at the age of 10 weeks, and brought her to a loving home with a huge yard and miles of trails just out the front door to explore with us. 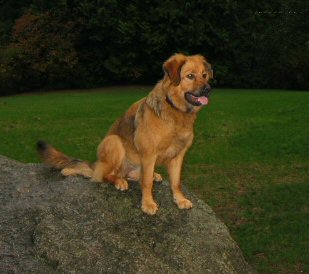 Carmanah’s paws were huge for her puppy body, and she is reportedly a Golden Retriever/German Shepherd/Husky/Newfie mix, so we knew she would be a large adult. As outdoor enthusiasts, we also wanted the freedom of taking her off-leash onto the trails and into the mountains without worrying that she would run after a bear (or even a squirrel). We also wanted a well-behaved dog that we could trust around the many children in our neighbourhood.

We worked hard to socialize Carma but were slowly realizing that her rough start in life may have strengthened her will and she was completely un-phased by “No!”, clapping or any other verbal reprimand for that matter. 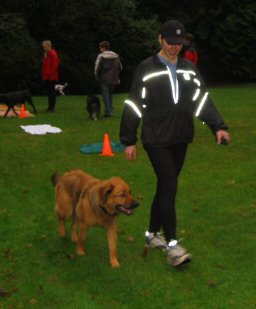 When we say “un-phased,” we mean she wouldn’t even turn her head for an instant. She had also picked up a few undesirable habits at the shelter and as working professionals we couldn’t take every day off to work her through it, despite wishing we could!

Luckily for us all, we saw Jeff’s brochure at a dog daycare and set up a meeting at our home.

During Jeff’s initial demonstration of his and Shelby’s skills we were impressed with not only the training but also with his obvious love for dogs.

We signed up that night and by fourteen weeks of age, Carma had begun indoor training. Progress was fast and we started the park sessions after a few weeks. 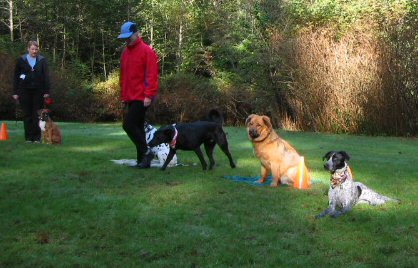 Training has gone especially well and she knows all the commands and corresponding hand signals. She has just learned to “sit”, “stay” or “down” when the command is issued from a distance as she runs towards or away from us.

She loves going to class sessions in the park and getting to see the other dogs.

Carma also enjoys much more freedom thanks to her training and is loved by the neighbours and children. She exhibits all the enthusiasm of a puppy without the annoyance of jumping, biting or other impolite behaviors. 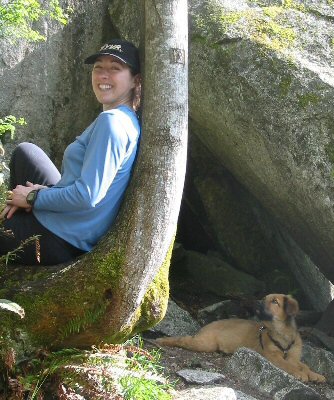 We find Jeff to be more of a coach than a traditional trainer. He has taught us to communicate better with Carma and provides on-going support within a community of his clients through regular, scheduled park sessions. We truly believe that Carma’s training and ability to listen to us has created a much stronger bond than if we had not used Jeff.