Bonnie became part of our family when she was four months old. She had been adopted by one couple and returned to the breeder because they just couldn’t cope with her behavior. When she came to us, she was completely out of control and hand shy. If anyone reached out their hand to her, she would quickly dodge away. She would not come when called….ever. She ‘did her business’ in the house, tried to catch the cat, had no bite inhibition and chewed on whatever she could get a hold of. It was a long, slow, and very frustrating process to correct these behaviors. 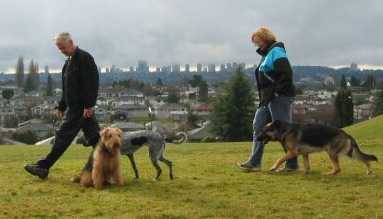 Bonnie turned one year old and we thought we had made it, having overcome many of her problems. She was well socialized with other dogs and people but she still had a mind of her own and when she did as she was told, it was always on her terms.

She would not reliably come when called, and our walks in the off-leash parks were more often an ordeal than fun. She barked uncontrollably at people passing by on our street. We worked with an obedience trainer who used food as a reward system and it worked, only if Bonnie had nothing else she wanted to do. Food just isn’t that important to her. Sometimes she was a “good dog” and sometimes she was a “naughty dog”. We thought, oh well, we can live with it if that’s as good as she’s going to get.

Then Bonnie turned two years old. In retrospect, we realized that she had a strong prey drive, but she had only chased the cat, birds and squirrels which she never caught so we were not too concerned. Then one day she saw a very small dog in the park and took off after it. When she caught it, she shook it. Luckily, damage was minimal, but we were in shock. We realized that we couldn’t trust her again off leash. We kept her on leash on all future walks and she became even more aggressive to dogs she didn’t know.

We were at our wits end and very concerned for Bonnie’s future when we contacted Jeff at “all about dogs”. We took a leap of faith and signed up for classes. The improvement in Bonnie was immediate. After working with her under Jeff’s guidance for three months, the difference in Bonnie is amazing. She is safely and happily off-leash in the parks, she responds to us immediately, anytime, anywhere and her tail never stops wagging! She is a joy to us now, and we will continue classes from time to time because it’s fun! We are also looking forward to getting into agility!

Thank you, Jeff, for making us all very happy.