Bo came into our lives at the early age of four weeks old. Needless to say he was babied by everyone who met him and trust me he met a lot of people, because we took him absolutely everywhere. He really learned to “ham it up”. People would carry him and rock him as if he were a baby, myself included.

We had always planned on training Bo, because we wanted a social dog that we could take everywhere and not worry about him not listening to us. 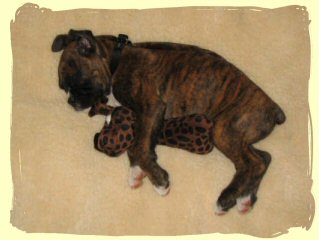 I knew training a boxer would be difficult but I thought Bo might be different since he seemed to pick up on things easily. By eight weeks Bo was potty trained, he could sit on command and shake a paw. But that was as far as it went, walking,    counter surfing and getting into everything was a constant problem. Plus if you know boxers, you know that they are full of VERY playful energy and love to jump on everyone they see. 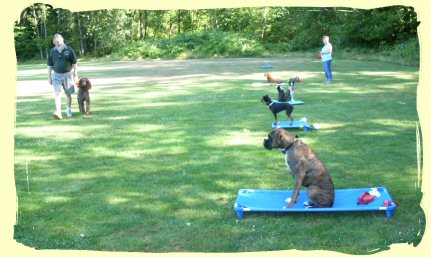 Bo did not disappoint. For some strange reason not everyone likes being jumped on and given a big slobbery kiss. Bo would jump and kiss people right on the face. Now this was not what we wanted. We wanted to be able to take Bo on walks and be confident that people would not walk on the other side of the street. 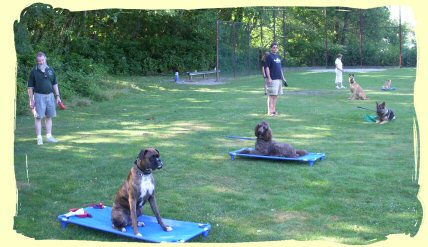 Bo’s vet told me I should wait for training until Bo was six months old, so late October I began phoning different places. The places I phoned just laughed at me and said they only had classes available in the summer. I thought this was silly because I walk Bo year round not simply in the summer. Bo would have to be used to any and all situations. If I was willing to train in any weather my trainer would have to be willing as well. The next place I was going to phone was “Sit Happens” saving myself being laughed at again I decided to look at the website instead. Once I saw a boxer on the opening page I was sold. I filled out the questionnaire and that night Jeff phoned. Already I was impressed with the dedication that Sit Happens had shown.

Then Jeff said something that made me very happy, he said they would come to my house and give a FREE demonstration. 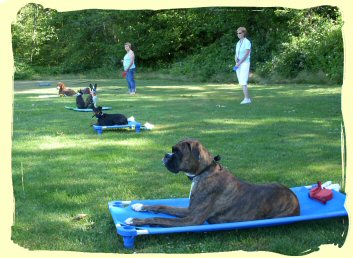 Sit Happens came over that week showed us how well behaved their dog was, which was very impressive. Then they started working with Bo, our jaws dropped and we immediately signed him up. We haven’t regretted our decision one bit in regards to using the Sit Happens method. I have a happy, healthy dog that listens to me and isn’t afraid of me – what more could I ask for. 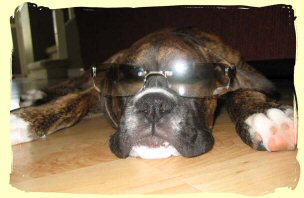 Thank you Sit Happens for giving me the
tools to help our dog be the best he can be.