We’ve never owned a dog, but after our old cat Fred died at 19 (a huge non-fan of dogs was our Fred), I decided it was time for a dog. I looked for over a year at shelters and on-line and contacted breeders. I finally decided that it seemed better to look for a dog that already “was” than for one that was “special order”.

When I saw Tucker on-line and showed him to Bill, it was the first one that Bill said without hesitation “he looks right!” So, after what seemed to be all the right questions, (as I said earlier we never owned a dog and really didn’t know much about dogs so we of course had to pick a “TERRIER”), off we drove to Yakima in 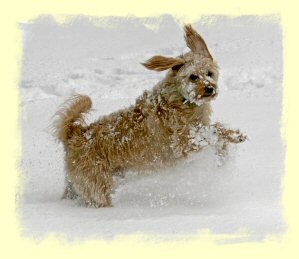 south eastern Washington, stayed overnight and met a volunteer at the rescue organization’s tiny office the next day. He was exactly what we wanted. The right size, very excited and friendly, non-shedding. Perfect!

When we got him home I swear he didn’t pee for 2 days. He was perfectly behaved I guess, for a 4-month old puppy! I started walking Tucker, and sheesh! He lunged at people and dogs. He barked like a maniac standing at the window, at people walking by on the other side of the fence, at the doorbell.

We went to a local trainer recommended by our vet’s receptionist! Um, not so much. Tucker was totally out of control with excitement and learned nothing. When I told her the problems I had walking him, I was told 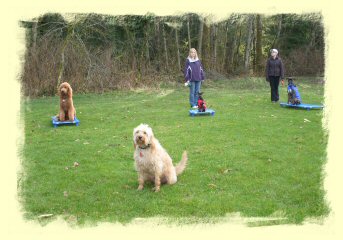 “then don’t walk him”. We are not talking couch potato here, this is a high energy dog! Bye bye obedience lessons. Then we hooked up with another boarder/trainer and left him there for a week while we went away. No worries – he was going to be walking perfectly on leash. When we got back, he could sit, stay and obey the basic obedience commands, which he could do before but I have to admit he did them faster. No walking on leash had happened! Lots of exercise, no walks. A pinch collar was the recommended solution.

Then we tried another one and showed up on Sunday morning for a one-on-one. He was yanked up and down the street and was suitably cowed. He was deemed “a good dog”, no worries. A choke chain was definitely the way to go according to this one. Much better than the pinch collar apparently.

Then I called a franchised dog trainer in our region I found on-line. The person came out, was very nice and listened intently – after I had the full meal deal spiel of course. We went walking. We walked past a couple of people, Tucker lunged and growled, and this trainer said “I was so surprised when he did that!” I guess I was just flapping my lips for the last hour!
Then…(can’t believe there’s a “Then” can you?). 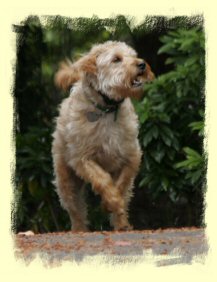 Off to another facility, 3 weeks of “boot camp”. We visited every weekend and he could sit and stay and down with the best of them (all of which he could do before) and on the last day, the fellow said to me “He’s shown a bit of dog aggression”!! Um, way to listen pal!

Daycare was no problem. No dog aggression. Mr. Affability. It was only on walks, or behind barriers that he was aggressive towards dogs.

Thousands of dollars on a rescue dog who was making me cry waaay too often.

A month later I found Jeff’s site on-line. He came out and miracles started to happen. Okay, they were miracles to us! He brought his dogs right up to the fence, and Tucker sat. We walked, and when he started to take after a crow, he could be stopped.

We’ve had our ups and downs since, but what we know for sure is that the only training that has worked for

us, and Tucker, is Sit Happens. The rest, for us was a waste of energy and money.

We still go to lessons whenever we can because we still have stuff to work on but the one thing I can say with no hesitation, is that in our sea of dog trainers and methods, after months of frustration and dollars down the drain, we have found the trainer that has made Tucker into a dog we love to love. 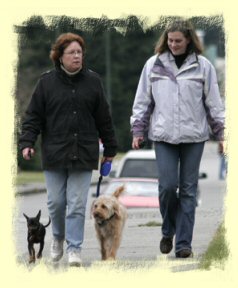