In October 2005, we suddenly found ourselves dogless. Our two Shibas of 15 years had both passed away, and we entertained the thought of not getting another dog… for about 24 hours. Then we went to a dog show, and saw the Nova Scotia Duck Tolling Retrievers, and we were hooked.

We met a wonderful Toller breeder who lived close to us. There were no puppies available, so we went on a waiting list and we waited. In the meantime, we were introduced to two dogs from the previous litter, and had the privilege of dog-sitting them when their owners were away. They were the most well-behaved, well-trained dogs we had ever encountered, and they both used the same training method – Sit Happens.

Our Toller breeder, Jamie Klein, also used the Sit Happens method with her 3 dogs, and recommended it without hesitation. We had trained our two Shibas with various methods, went to all kinds of classes, and read all kinds of books. On leash, they were excellent dogs. But they were 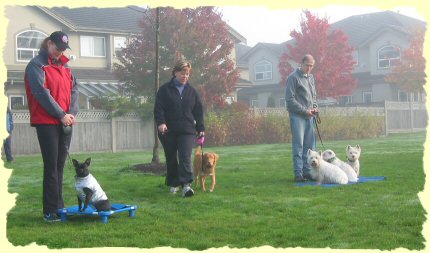 NEVER off leash, and any opportunity that they had to escape, they took. Dashing out open doors, going under fences – they couldn’t be trusted. And once they ran off… good luck getting them back. But the Tollers that we looked after, Purdy and Cadbury, did exactly what we told them to do without question! And they came back when they were called! We had just been exposed to the best possible advertising for the Sit Happens training method.

When we got our beautiful puppy, Riva, in June, we knew that we wanted to train her using the Sit Happens 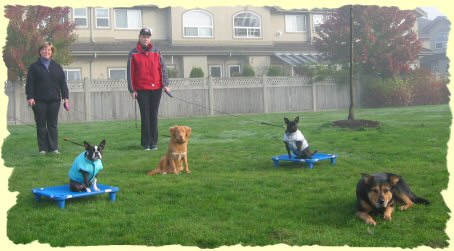 method. She was eight weeks old, and we put off calling Jeff for a week because, well, you know, puppies are so darn cute and can do no wrong! We thought she was too young to train but soon found out that the nasty puppy habits of nipping, biting, chewing everything in sight, and peeing all over the house had to be controlled. Our two children who were head over heels in love with our new addition were tired of their arms getting all scratched up.

Riva began her training and we saw immediate results. No more nipping with those sharp puppy teeth! And with the ‘place’ command, she could share the kitchen while we were making dinner without tripping us up 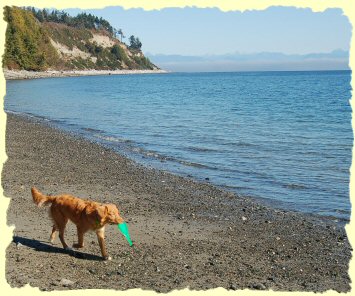 and running through our legs every time we turned from the stove or the counter. The ‘place’ command also became invaluable when we were at other people’s houses, and we came to understand and appreciate just how incredible the Sit Happens method is.

Riva is 6 months old now, and everyone who meets her says that she’s the best behaved dog they’ve ever seen. Most people can’t believe she’s still a puppy! She meets about a hundred people every day, as I take her to school to pick up my children. She is off-leash most
of the time, and loves to run and play and swim with other dogs.

What a difference for us! We have never had an “off-leash” dog, and we are loving this new experience. We are never afraid to release her from her leash because we KNOW that she will always come back. 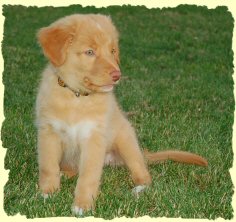 It is hard to imagine this happening without the training that Sit Happens has provided.

Thanks, Sit Happens, for all you’ve done so far and for our continued success!