We had wanted a puppy for a long time and when we were ready we connected with Jamie at Readyfor Tollers.Our joy was indescribable when Jamie informed us that we were getting a puppy from her latest litter. In April 2011, we brought home Enzo, a nine week old Nova Scotia Duck Tolling Retriever puppy.
We live in the West End which is dog friendly, but the neighbourhood also poses many challenges for a pup and his people.Other dogs, fireworks, parades, traffic, wildlife and the general hustle of a busy city makes for an environment where a dog must learn to be a good citizen.

From the start we’ve had great plans for Enzo, running on the seawall, walks in the park, play time with other dogs, fetching, swimming you name it we wanted to try.

Readyfor Tollers shared with us the great success that they have had with Sit Happens, and shortly after we brought Enzo home we called to make an appointment for a consultation. Marilyn and Flirt, her Papillon, came to see us and Enzo (at 13 weeks he was already displaying the high energy and drive Jamie told us about). After seeing Marilyn and Flirt’s demonstration we signed up right away and started the process.
Like anything worth doing training takes time and effort. 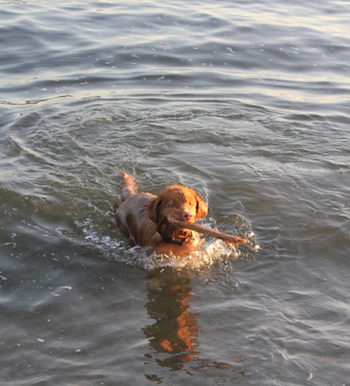 After every class we practice what we learnt and began to notice a difference between Enzo’s behaviour and other dogs.

He quickly learnt “place,” and then the other commands like “sit,” “come,” and “heel” followed soon after.

Now at nine months, Enzo is at the stage where we are comfortable walking him off leash, running with him on the seawall, and trusting him to come when called. 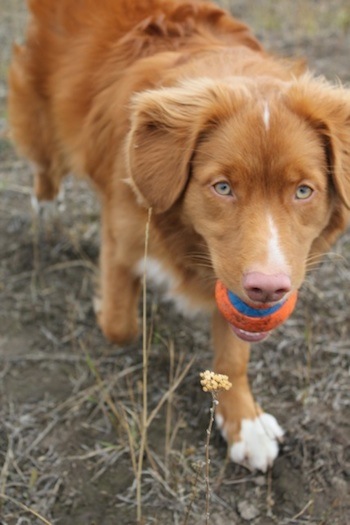 He’s a joy to be with, playful, happy and silly.

People we meet on our walks comment on how well trained he is and are surprised when we tell them he’s only nine months old.

We’re well on our way to having the excellent doggie citizen we always wanted!