Hello— my name is Jetta Russell-Brown. I was born May 25th, 2004. My parents are of a sophisticated German Shepherd lineage. At 7 weeks old my siblings and I were taken from our Mom [our Dad we never saw] and placed in a large out door kennel. We were cold, lonely and SO SCARED! About six days later the kennel gate was opened and my 3 sisters and I were let to run into the big grassy yard. My three brothers were left in the kennel. I never saw them again. In the yard a little old lady was looking at us. I thought –“this is kinda neat”—and ran up to greet her. For a time, my sisters and I were allowed to play together. I noted out of the corner of my eye that the little old lady seemed more interested in me. I foolishly put on an act to impress her. I was picked up and carted away from my home and my family.

I WAS SO SCARED —- I cried and cried. I couldn’t stop shaking. As we were driving along the little old lady would reach into the wee crate, where I lay trembling and crying, and pat me, and tell me we were going to be partners for life. Eventually, we stopped. I was removed from the security of the wee crate, set on a cold cement floor and introduced to “my new sister”. She was a strange silky brown thing who stared at me as if in total disbelief and instantly started peeing uncontrollably. I ignored her. Soon she began biting me, pushing me to the ground, and chasing me. I couldn’t escape her. There was no where I could hide. I WAS SO SCARED.

As the days unfolded strange people came making weird sounds—“ooh, aah” and trying to hold me and pet me. I wanted none of it. I am not a softie—I am a German Shepherd! That pushy silky brown thing whom they say is my sister continued to bite me, chew my ears, grab my shaky legs, sit on me, and chase me at every opportunity. I WAS SO SCARED. At all times the little old lady was there to protect me, feed me, and comfort me. I and my sister were peeing and poohing all around the house. My sister would escape her play pen and let me out of mine. The little old lady never showed if she was upset—she just snuggled with us, fed us and cleaned up our messes[for 8 months]. I was beginning to realize she was my only friend. Then I met the most wonderful person whom I learned from my brown sister that she was her favorite Aunt. She soon became my favorite aunt also. Nothing seemed to bother my pushy sister. She never listened to the little old lady nor to our favorite Aunt. With boundless energy she just did her own thing – torture me, chew books and telephones, try to climb on counters, eat toilet paper. Once, she was running around with a big butcher knife in her mouth which she had stolen off the counter. In the evening she would cuddle up in the little old lady’s or our favorite Aunt’s lap like she was a perfect angel. 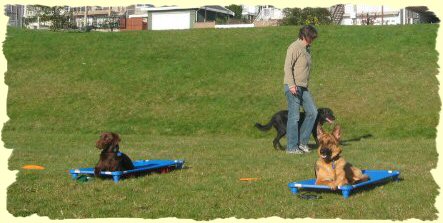 A few weeks passed we were put into our wee crates and taken for a long, long car ride [6 hrs]. When we were released we were totally overwhelmed by the open space, huge yards, a lake, and miles of bush with exciting trails—NO FENCES— we could really run away and the little old lady would never catch us. I love to run and run and that I did at every opportunity. Again many, many people came making the same strange sounds —“ooh, aah”— trying to hold me— no way! I WAS SO SCARED!

There were good days when we roamed the trails and back roads. I developed a fondness for chasing cars, ATVs, deer, foxes. “She could never stop me” – I did note that the little old lady was looking exhausted and discouraged.

One day I was taken to a lady whom they called my “personal trainer”. A cold metal thing was placed around my neck. Strange words were yelled at me—SIT- STAY- HEEL—and as each word was uttered this cold metal thing choked me—my neck and throat ached. I WAS SO SCARED! When I came home I talked to my sister who explained that the same thing had happened to her. She expanded that she didn’t like it “but just kept on trucking”. She had discovered if the long line wasn’t attached to the metal thing they could not catch her to choke her. She tolerated it for the time but otherwise continued to do her mischievous acts. Thus, I learned from her that I could chase cars and deer when the line was off –no one could ever catch me. My sister pretended to be so sweet and obedient when the little old lady and our favorite Aunt were present.

We returned to our home in the city to restricted parks and fences. My sister whom I was now calling “Bailey” and I were taken separately for long, long walks on side walks and in parks by the little old lady whom we both were now calling “Joan” or more affectionately our “Friendie”. I WAS SO SCARED! —-Always strange people, big ones, small ones, crazy dogs, cars, buses, trucks, noise. I would bark, nip, at these strange people and animals. I would try to chase cars as I loved to run. The metal thing around my neck kept choking me. I was getting bigger and stronger. I could drag Friendie a fair distance. In the city, when out doors I was never detached from the long line and choking thing. I could never run any more. Our Friendie was too old to run. Our favorite Aunt told us one day that we had to be kind to her as she had a bad heart, very sore feet and joints caused by previous treatment for cancer. I had to walk at a pathetically slow pace. I was so miserable and refused to listen to Friendie. We weren’t even allowed in the yard without that metal thing on. I WAS SO SCARED. I barked and nipped at everyone if I didn’t know them.

One day, as we entered the park I looked across the field, my eyes spied a man and lady and to my utter amazement FIVE dogs. All dogs were lying down staring at me. Forget about the scared thing—I WAS TERRIFIED! The two people beckoned us over. I was horrified as my Friendie started forward. I said to myself –“NO WAY. I AM NOT GOING NEAR THOSE MONSTERS!” I headed the other way only to feel that choking sensation— I attempted to hide behind my Friendie but we just kept going. The man and lady sounded so kind, looking at me with caring eyes as they talked to my Friendie. They seemed to be talking about me and I heard Bailey’s name a few times. While they were talking I was staring up at my Friendie. I noted that she looked so tired and weary. I thought, “I wonder if all this walking Bailey and I is just too much for her”—[most of the day she was walking one of us]. I became so sad but still terrified. On my return home I mentioned the scenario to Bailey. “Oh, yes” she replied, “I met that man and the dogs yesterday. He is such a neat person and those dogs are remarkable. So obedient! I would love to play with them. We can’t as we always have the line attached to our Friendie. Those dogs are free. I envy them.”

A couple of days later, Bailey and I heard our Friendie telling our favorite Aunt, whom we now call “GINGIE”, about the people in the park. They sounded so enthused! 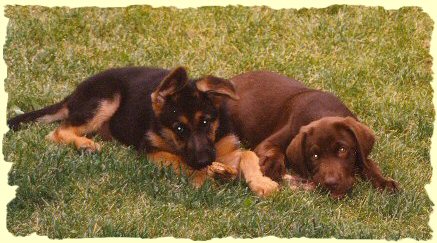 The next evening, the door bell rang. I did my usual loud barking, growling, nipping. To our astonishment as the door opened we saw that nice man from the park. Bailey, Gingie and I were introduced to “Jeff”. He paid no attention to my on-going fearful greeting. “Hmm”, I think “I’ve always been able to terrify all other intruders. Something is different about this guy”.

Jeff talked for a long time with Friendie and Gingie. Next, to our great joy, our metal thing was removed from our necks to be replaced by a pretty collar. Jeff took me and then Bailey outside. He was so positive and encouraging. He treated us with total respect. Bailey and I thought kindly of him. It was such a relief to be rid of that metal thing which we have since learned is called a “choker”.

Bailey and I slept soundly that night. We wear our new collars with pride. We have been attending some fun classes with Jeff and a variety of interesting dogs. At the classes we learned what is expected of us. We are allowed to run and play 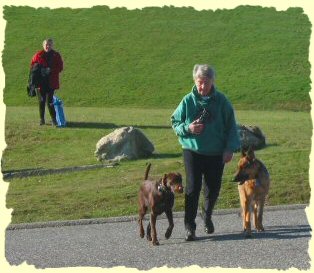 with other dogs. We roam freely, chase each other, run and run. We respect other people and dogs. Bailey and I walk together with Friendie.We are so proud when we hear passers by compliment Friendie on how well trained we are. Life is good. I heard our Friendie tell people she never worries about us being bad or running away any more. We come when she calls. We are still learning new challenges. However, I still chase the odd deer at the Lake. I have no interest in chasing cars—I learned that is not a good thing to do. I still bark loudly when the door bell rings to protect my Friendie but when she tells me it is “okay” I try to stop. I am so much more confident and am rarely ever scared. I love to be petted and like people. I don’t need to nip, growl, and bark or hide any more. This week my vet called me “Princess” and complimented me on such good behavior. He said I had the heart of a strong athlete. He noted that my heart was no longer thready and fast like a timid, high strung dog.

Jeff, thank you for taking time to care about my Friendie and me that day eight months ago in the park– I WAS SO SCARED AND TIMID—Friendie was so tired and weary. 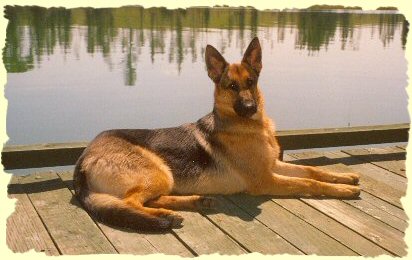 I have read the above and declare all is true. Jetta neglected to talk about our new beds. We each have one. Jeff brought them to our home. He calls them our “place”. We love to lie on them to watch Gingie and Friendie work outside. We don’t have to lie on cold decks and walk ways. Jetta has to lie on hers when company arrives. It helps her to stop barking. Jetta also didn’t mention her fear of thunderstorms. She would just go wild –so annoying! Now, when there is a thunderstorm, Jetta lies calmly on her “place” until the storm is over. She loves to dig holes in any garden or yard. This is getting better but still more work to do to correct that bad habit. I learned it is not a wise thing to do. 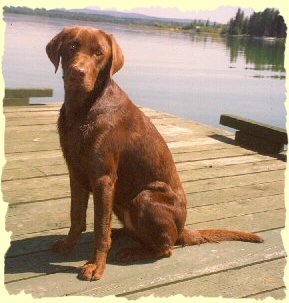 I am more obedient and not so pushy. I still try to sneak extra food!![Do I have a story to tell about that? It will have to be another time.] I love Jetta. She is so beautiful. I am kinder and gentler with her –really though—she use to be such a prude and a complete nerd before she met Jeff.

We are so proud to be members of the SIT HAPPENS Program.

Our Friendie looks so much healthier and our Gingie even takes Jetta and me at the same time for walks. Life is good—even in the city!!